Published on January 9, 2017 by William Nunnelley   Share this on: 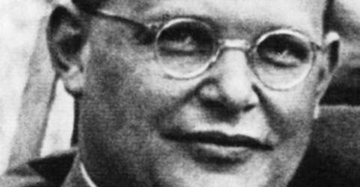 German theologian Dietrich Bonhoeffer, who would ultimately be martyred for his opposition to Nazism in his native country, spent a year of study at Union Theological Seminary in New York City during 1930–31. The year “had an especially significant and lasting impact” on Bonhoeffer, said Holocaust scholar Victoria Barnett.

The experience introduced him to American racism, said Barnett, and helped shape his views toward the antisemitism he would see in Germany after the Nazi party came to power in the early 1930s.

Barnett delivered a lecture, “From Harlem to Berlin: Dietrich Bonhoeffer’s Experience of American Racism,” at Samford University’s Beeson Divinity School Jan. 5. She is director of the United States Holocaust Museum’s Programs on Ethics, Religion, and the Holocaust.

Bonhoeffer worshiped at Abyssinian Baptist Church in Harlem with his fellow seminarian, Albert Fisher, an African American, during his year in New York. “I think there is little doubt that his experience of the Black Church, racism in America, was an important part of his journey,” said Barnett.

Bonhoeffer and Fisher taught Sunday school, and Bonhoeffer began to attend worship services that were “dramatically different from what he was used to,” said Barnett. The parishioners at Abyssinian opened their homes to Bonhoeffer, she noted, and he led a women’s bible study and assisted in weekly church school.

At the end of the year, Barnett said, he wrote a report of his experience, saying, “I heard the gospel preached in the Negro churches . . . Here one really could still hear someone talk in a Christian sense about sin and grace and the love of God and ultimate hope . . . .” He contrasted the “often lecture-like” sermons preached in white churches with the “captivating passion and vividness” of the sermons he heard at Abyssinian.

Bonhoeffer “immersed himself that year in the realities of racism in the United States” by taking courses on social issues and reading African-American authors, said Barnett. He “even got a personal glimpse of American racism,” Barnett said, when he and Fisher visited a Washington, D.C., restaurant, and Fisher was refused service. They both left.

In Harlem, Bonhoeffer “witnessed racism that deeply outraged and troubled him, and he surely carried those impressions with him in the years that followed,” said Barnett. “But it didn’t immediately change his life’s course—nor, it must be said, did the persecution of German Jews immediately change what he was doing.”

Bonhoeffer was an immediate opponent of National Socialism when Adolf Hitler came to power in 1933, Barnett noted, and he immediately opposed Nazi state racial laws and the attempt to implement them in the church. Although intellectually and even emotionally, Bonhoeffer felt “a sense of solidarity with the Jewish community, he did not share their vulnerability in 1933 in the sense that he stood with them and became the target of the violence that was now directed against them,” she said.

“He was able to focus on other things, which he did during the 1930s, and it was only in the course of his own journey, once he was in the resistance and himself became a target of Nazi oppression, that he began to understand,” she said

By 1942, after the Nazis had been in power for almost a decade, “we see a different Bonhoeffer,” one who had ended up in a place “in which he was not only prepared to bring down the Nazi regime, but to share the fate of its victims,” said Barnett. “Bonhoeffer’s time at Abyssinian “marked the beginning of something,” she said.

He was arrested in April 1943 and imprisoned by the Nazis until 1945, when he was hanged just few days before the end of World War II. Bonhoeffer is one of six Christian martyrs remembered with busts in the sanctuary of Beeson Divinity School’s Hodges Chapel.