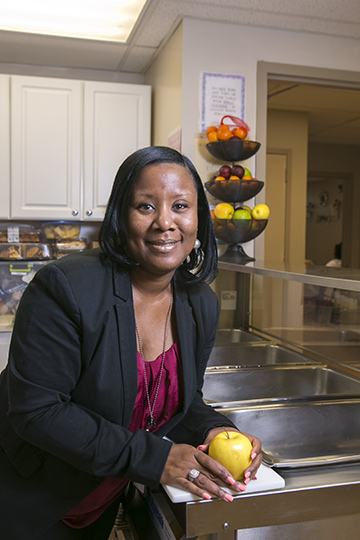 A homeless mother applies for food assistance in a Department of Human Resources (DHR) office. When asked if Birmingham’s Jessie’s Place provides meals, she confirms she and her children are fed there.

Until last August, that honest answer could have led to hunger. What the mother and DHR caseworker didn’t know was that Jessie’s Place was solely dependent on fluctuating general public and private food donations. That honest answer also meant that, once denied, women eligible for food assistance might not reapply. The resulting hole in society’s safety net undermined those women’s efforts toward eventual independence.

Scott started by asking careful questions of clients, caseworkers and shelter workers. By piecing together their answers, she soon identified the underlying problem and its solution.

“What I learned was that it was all about communication. Caseworkers don’t automatically know how these shelters or ministries structure their food programs. They were therefore unfamiliar with how Jessie’s Place provides meals from donated food rather than federally provided food.”

Since DHR is responsible for ensuring governmental services aren’t duplicated, the women’s honest answers prohibited them from receiving aid. Once denied, they were unlikely to apply again. Jessie’s Place staff therefore feared for the futures of those leaving the shelter without food assistance.

“Annette assisted us with training the staff on how to assist the ladies when they fill out the paperwork,” said Melton. “It was so helpful, because not only does the food assistance impact them while they’re here, but after they leave here.” Along with job-ready training, Jessie’s Place helps women identify resources that help them bridge income gaps as they work toward financial independence.

“We enjoy working with the Samford social work program,” said Melton. “They are training these students in how they can benefit the entire community.”

“Samford is a Christian learning community, and we are called to do social work ‘as unto the Lord.’ Our calling is not to work for the recognition or for the money. Our students are called to work for God,” said Adedoyin. “Everything we do exemplifies a higher calling. This accomplishment showcases how a Christian social worker must go the extra mile, to ask the extra questions as a difference-maker. What you see in this project is the believer’s touch.”

Jean McLean is a freelance writer.