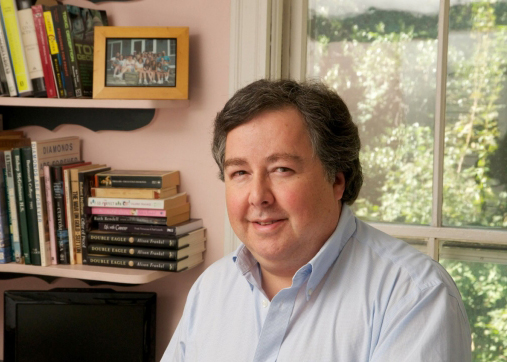 Pulitzer Prize–winning science and environmental journalist Dan Fagin described urgent, and related, crises in journalism and the Earth’s environment as he presented the 2017 J. Roderick Davis Lecture at Samford Nov. 2.

The university’s Howard College of Arts and Sciences and the Frances Marlin Mann Center for Ethics and Leadership partnered to host the free public lecture by the author of Toms River, a gripping, true account of childhood cancers caused by industrial pollution in the town of Toms River, New Jersey.

Fagin is professor of journalism at New York University’s Arthur L. Carter Journalism Institute, and director of the NYU Science, Health and Environmental Reporting Program, but he described his work very simply. “I tell stories about us and our planet,” he said, and the stories for which Fagin is best known suggest a significant change in how the former subject relates to the latter.

“We have transformed the chemistry of the oceans, which are much more acidic than they used to be,” Fagin said. “We’ve obviously transformed the composition of the atmosphere, and we’re in the process of transforming the climate.” And so, Fagin said, what he does might be called “Anthropocene storytelling,” a reference to what some scientists call the new era dominated by humans.

Fagin described the Anthropocene as “a profound moment in the history of the planet, when one species, and one species only, has an impact on millions of other species that overwhelms the impact of natural processes.” He said human activity is creating evolutionary pressures at unprecedented speed, including on Monarch butterflies, whose amazing and endangered annual migration to Mexico is the subject of his current research and writing.

Referring to the story of Genesis, in which God gives humans dominion over the Earth, Fagin said “we now exercise that dominion with a power and magnitude that Biblical civilizations could not even imagine.” Fagin asked his audience to reflect on what that means for the planet.

“We can exploit the power that we have or we can embrace another Biblical concept—the concept of stewardship,” Fagin said. To do the latter, he said, we have to think beyond our individual situation and consider “what’s in the best interest of our children and grandchildren and the rest of our descendants.”

“This is your moment,” Fagin told the students in his audience. “These are the core decisions that your generation will have to face.”

Unfortunately, Fagin said, “we are at a crisis moment for storytelling” as we seek good information and compelling stories to help us make these decisions.

Fagin said the shifting of advertising revenue from traditional journalism to social media has made it easy to apply “filter bubbles” to our lives, hearing only what we want to hear and ignoring information that challenges the dominant beliefs of our peer groups and local cultures. The result in this country, he said, is that responsible journalists are "outnumbered by people who are being paid to manipulate," and public trust in journalism is declining as a result.

“If we don’t fix this problem we’re going to be in deep trouble as a society,” Fagin said. He said it takes work and a sense of something of value beyond our immediate circumstances and environment to weigh the value and integrity of news, and to understand how we contribute to the spread of either the good information, created to enlighten, or the bad information, created to manipulate. As consumers and creators of information we must consider the credibility, sources, context and motivation of all stories we encounter, reflect on our personal biases and overcome the urge to win online arguments.

“When new information comes to us, and when we spread that information, our goal should never be to prove that we were right,” Fagin said. “The ‘see, I was right’ culture doesn’t work very well for taking on information and solving society’s problems.”

But what of those journalists who continue to hold the traditional values of their profession? For them, and for those who would follow, Fagin offered examples from Toms River and his forthcoming book on the Monarch butterflies to illustrate how they can tell compelling stories about science and break through the filter bubbles. He summarized his successful approach and offered it as advice for others who would take up that challenge.

“If you tell them the right way,” Fagin said,” true stories, based on data and compelling stories that feature memorable characters, can actually make a difference, even in this highly polluted science communication environment.”