Published on November 1, 2017 by Maryellen Newton   Share this on: 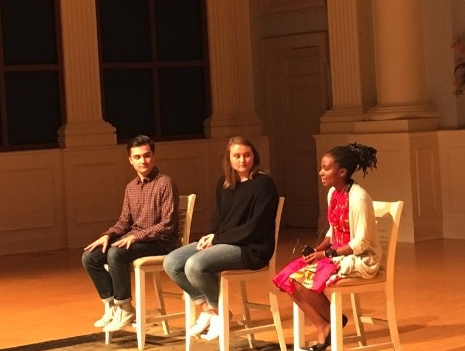 Samford University students participated in a unique national event Oct. 27 with the theme of healing a divided nation. Samford was one of the sites for Q Union, a national broadcast set of speeches that were hosted by a wide spectrum of faith-based and public institutions.

Q Union has a faith-based mission to focus on creating a space where people can engage in big questions to bring hope, healing and leadership in the days ahead.

The evening started with a nationally-broadcast speech from David Brooks, a New York Times columnist and best-selling author, speaking on cultivating virtue. He talked about key qualities he saw in people who have obtained success in life. He said that they embed themselves in their work, they make commitments to their spouse and family, vocation, faith and friends, and they have exceptional mothers who foster their growth.

He pointed out that living in today’s society makes commitments difficult. People are told to be individuals, but he notices that people are loosely-attached to their work and that they lack passion.

After Brooks, Samford senior Parker Millican spoke on the refugee crisis. He spent time in 2016 working in a refugee transition camp in Greece where he saw 11-year-olds who had been through more in their short time on earth than many Samford students will see in their lifetime. He said that Christians have been given a light, one that is a rooted in the hope of the Gospel. He urged students not to stay in circles of comfort, but to use their light to pursue the damaged places of the world.

Next, sophomore Joyeuse Senga spoke on resilience. Senga is from Rwanda, so the Rwandan Genocide of 1994 hits close to home for her. She said that the government and Rwandans are looking to build resilience to hope for the better. She said that Christians have the obligation to build the kingdom of God, and there is hope for a better tomorrow.

“Does technology help us love better?” She asked. Powell said to make love the test in when to use your cell phone. If an action does not emanate love, it should not be done.

Jason Petty, who goes by the professional name Propaganda, wrapped up the national broadcast portion of Q Union. He spoke on complicated moments and connections. He urged the audience to recognize the overlap they have with others. He does not want good causes to be in competition with each other.

“We’re not called to sameness, we're called to oneness,” he said.

Samford sophomore McKenna Neville concluded the evening by speaking on inclusive culture. She believes Samford is a perfect place to be inclusive and welcome outcasts, yet she rarely sees this happening. She said that inclusivity is tough and not always the cool thing to do, but Jesus was inclusive, so Christians are called to be as well. She challenged the audience to not care about doing what is cool, notice those who are different and invite them into their lives.