Published on November 13, 2017 by Olivia Halverson   Share this on: 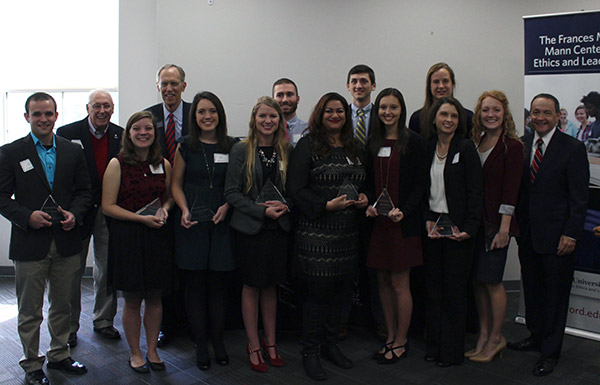 Students were nominated from each of Samford’s 10 academic schools by the deans, and one student- athlete was nominated by the athletics director. These 11 Samford students were chosen as tops in their respective schools in combined academics, positive character, ethical leadership and service to others.

Drayton Nabers, Mann Center director, opened the ceremony. “This is a very special day in the life of the Mann Center,” Nabers said. “It gives the center an opportunity to recognize leadership and ethical orientation of our students.”

Nabers also acknowledged the family members in the audience and others who had been instrumental in laying ethical foundations for the students who were being awarded.

Claire Wells (School of the Arts), senior theatre for youth major from Montgomery.

Smith earned the additional honor of the Mann Center’s Joe McDade Scholarship, which carries a one-time gift of $3,500. The ideal nominee for the Joe McDade Scholarship demonstrates a life and character lived in the spirit of Christ; a contribution to the overall betterment and wellbeing of the university; participation in a wide range of campus life; leadership ability; an embodiment of the overall goals, mission, and spirit of the university; and commitment to the long-range development and wellbeing of the university.

Funding for the scholarship came from 1961 graduate Joe McDade.

Samford President Andrew Westmoreland gave an encouraging word to the honorees at the ceremony. He said, “We’ve been given so much, all of us have been given so much. Truly we understand the necessity for us in responding to the call of Christ in giving to others in a world that is in such need, and to do it all in an ethical way that brings people together and promotes goodness.”

Olivia Halverson is a journalism and mass communication major and a news and feature writer in the Division of Marketing and Communication.
Samford is a leading Christian university offering undergraduate programs grounded in the liberal arts with an array of nationally recognized graduate and professional schools. Founded in 1841, Samford is the 87th-oldest institution of higher learning in the United States. The Wall Street Journal ranks Samford 1st nationally for student engagement and U.S. News & World Report ranks Samford 66th in the nation for best undergraduate teaching and 104th nationally for best value. Samford enrolls 5,683 students from 47 states and 19 countries in its 10 academic schools: arts, arts and sciences, business, divinity, education, health professions, law, nursing, pharmacy and public health. Samford fields 17 athletic teams that compete in the tradition-rich Southern Conference, and ranks 6th nationally for its Graduation Success Rate among all NCAA Division I schools.
Director of Communication
Holly Gainer
Hgainer1@samford.edu
912-344-8443