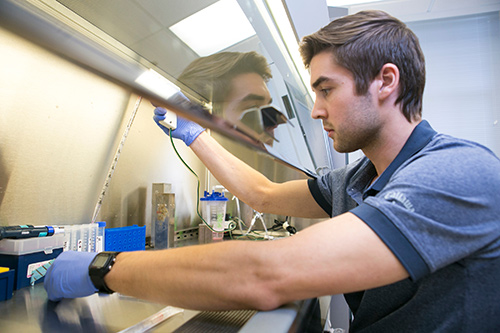 Adam Ambrosetti, a fourth year McWhorter School of Pharmacy student, has garnered national attention for his research with associate professor Robert Wang. This summer, he was named a Gateway to Research Scholar by the American Foundation for Pharmaceutical Education (AFPE). Ambrosetti is the first Samford student to receive this award.

While the course of his research has spanned more than two and half years, Ambrosetti began his experience with an interesting observation that occurred within his first week.

In 2015, Ambrosetti was selected as a summer research intern with Samford’s Pharmaceutical Sciences Research Lab, working alongside Wang, who is known for his cystic fibrosis research.

Ambrosetti began his research by studying a compound called B6, which was designed by Samford professor Bobby Riggs as an anticancer agent. An analogue of B6 has the potential of influencing protein folding. Wang had the idea to test the impact of this class of compounds on CFTR in a cell model. One specific approach they took was to test the effect of combining B6 and lumacaftor, one of the two active ingredients of ORKAMBIâ. Interestingly, B6 and lumacaftor synergistically enhance the maturation of CFTR in the cell model. Or, to say it plainly, it is likely that B6 can significantly enhance the efficacy of ORKAMBIâ.

“It’s exciting to have a discovery like that right when you jump in, but it’s a bit misleading for what science is really like,” Ambrosetti said. “I thought if this happened in the first week, imagine what we can do in three months.”

Ambrosetti spent the remainder of the summer validating his findings. Later that fall, Ambrosetti and Wang submitted an abstract to the Experimental Biology Meeting, and it was accepted for both poster and oral presentation.

The experience had Ambrosetti hooked. The following spring, he entered into the second phase of his research, looking at how the combination of B6 and lumacaftor improves the functionality of CFTR. Yet a major obstacle stood in his way.

A year and a half before, Jake Thompson, a 2017 alumnus and a then summer research intern, started to establish a CFTR functional assay, an investigative procedure, with Wang.

“This assay, despite its potential, was challenging and the reproducibility was low,” Ambrosetti said. “It fell out of favor in the cystic fibrosis field for this very reason.”

Nonetheless, Wang recommended that Ambrosetti pick up where Thompson left off and continue to optimize the assay to study B6.

“We basically tweaked the assay over and over and over again until it was reproducible,” Ambrosetti said. “I worked all summer and throughout the fall. It wasn’t until the spring of 2017 that the assay was completely optimized.”

The development of this assay led to some very interesting findings which inspired them to write a scientific manuscript. Today, Ambrosetti is using this assay to complete his research project on B6.

“Through this experience, I’ve learned there is no eureka in science—only progress. It happens during fall-off-your-chair moments as well as amid frustrations over failed experiments. At the end of the day, all of it is science,” Ambrosetti said.

Editor's note: As a Gateway to Research Scholar, Ambrosetti received a $5,000 stipend from AFPE that will support his continued research during his final year of pharmacy school. Emily Kirby, a 2015 alumna, and Yifei Fan also contributed to this research.