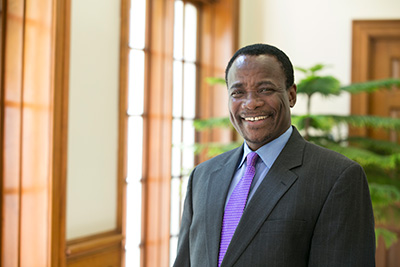 Samford University’s Cumberland School of Law has once again been recognized on a global level as one of its professors has been chosen to serve in an international leadership position.

Professor Paul Kuruk has been appointed as the facilitator of the Intergovernmental Committee (IGC) of the World Intellectual Property Organization (WIPO) headquartered in Geneva, Switzerland. Established in 1967, WIPO is the global forum for intellectual property services, policy, information and cooperation. It is a self-funded agency of the United Nations with representatives from 191 countries that operates with a mission “to lead the development of a balanced and effective international intellectual property system that enables innovation and creativity for the benefit of all.”

Kuruk will play a crucial role within the IGC in shaping the agenda, clarifying issues, developing consensus, and preparing and revising the text emerging from a complex process of negotiation.

“The negotiations at the IGC have come about due to the need to develop an international instrument to counter the misappropriation or unauthorized use of genetic resources and traditional knowledge of local communities and indigenous peoples,” said Kuruk. “As the facilitator, it is my responsibility to work to develop a consensus on all outstanding issues in the work of the IGC related to the protection of intellectual property, genetic resources and traditional knowledge.”

Kuruk said issues that the IGC faces include: the nature of the instrument to be adopted, whether it should be binding on member states or merely provide general guidelines and therefore not binding; the objectives, scope and subject-matter to be covered under the instrument; whether to provide for an obligation to require applicants for intellectual property rights to disclose the source or origin of traditional knowledge they have used in developing their invention or other creative work; whether to impose sanctions including revocation of intellectual property rights if the disclosure obligation is not met; and whether to require use of databases to complement or as an alternative to the disclosure requirement. The assumption underlying these approaches is that the information to be disclosed or contained in the databases could be used by the relevant stakeholders to demand a sharing of benefits derived from the exploitation of genetic resources and traditional knowledge related to the information.

“I am looking forward to working to narrow the gaps in the current draft text of the international instrument which is rather lengthy, contains numerous duplications and with far too many brackets placed around various provisions indicating divergences in the positions of the delegates,” said Kuruk. “Reducing the number of brackets through a determined effort at consensus building, merging ideas and themes, eliminating duplications and rearranging the provisions hopefully would result in a text that is simpler, provides greater clarity and coherence and therefore suitable for adoption as an international treaty.”

Kuruk was nominated and appointed to the position, which has previously been held by professors from Harvard Law School, the University of Virginia School of Law and Emory University School of Law. He has been involved in meetings of the IGC since 2001, having served as a delegate to the meetings, and advised the African Group of Countries on matters of strategy during the negotiations. He has also presented papers and made interventions during seminars conducted for delegates to the IGC.

“Professor Kuruk made a name for himself as a global expert on intellectual property rights in traditional knowledge and he has played major roles helping negotiate trade arrangements between west African states and the European Union,” said Cumberland School of Law Dean Henry C. Strickland. “This appointment is a tribute to his expertise and prior work. These important roles enable Professor Kuruk to provide his students global and real-world perspectives on international issues and the processes for resolving them.”