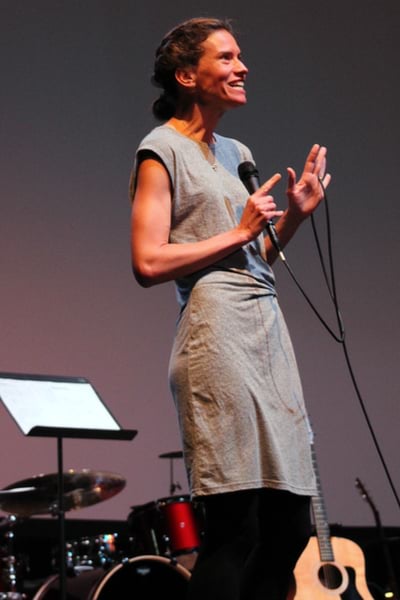 Samford University students have come upon the final weeks of the semester. Weariness is sure to settle in from long hours of studying and working on projects. Hopefully, the words from recent convocation speaker Jennifer Pharr Davis encourage students across the finish line and on to the rewarding season of Summer.

Davis is a 2004 Samford University graduate. She majored in classics and played tennis for the Samford tennis team.

Since her days at Samford, Davis has added hiker, author, speaker, wife and mom to her long list of titles. She has hiked more than 14,000 miles of long distance trails throughout her lifetime. In 2011, she claimed the overall fastest known time to complete the Appalachian Trail, covering 2,185 miles in just 46 days. Davis still prefers to spend her free time hiking trails, but nowadays she is often accompanied by her husband and two young children.

At Samford, Davis delivered a compelling talk on the pursuit of endurance—a topic so dear to her heart that it is the title of her most recent book, The Pursuit of Endurance: Harnessing the Record-Breaking Power of Strength and Resilience, published in April 2018. In her talk, Davis recounted stories of her own hiking adventures and the many events leading up to her record-breaking accomplishment on the Appalachian Trail.

Davis did not know it at the time, but she set out on what would become her 14,000-mile-journey when she was a sophomore at Samford. After promising herself that she would try something new each semester throughout her college career, Davis decided to train for a half marathon. After crossing that finish line, Davis went on to compete in a full marathon and an Ironman Triathlon in the following semesters.

Throughout college, Davis never felt certain about what career path she wanted to follow. Graduation came and went, and she still didn’t know what she wanted to do. But, competing in marathons taught Davis something very important about herself. “What I learned is that I liked going far,” she said.

With a little money saved and some post-graduate free time, Davis decided she would hike the Appalachian Trail. She quickly realized that despite all her running and years of playing college tennis, hiking was the hardest thing she had ever done. “Because it (hiking) is relentless.”

All day, every day, Davis went up and down mountains with a heavy pack on her back. Her shoulders ached. Her feet were blistered. It was often cold and rainy on the trail. And, she was alone, away from friends and family.

She navigated her path with the help of maps and guidebooks. Weather conditions sometimes made it challenging for her to see trail markers. One snow storm in the Great Smokey Mountains left Davis feeling lost and confused, with one eye temporarily frozen shut.

From that experience, Davis realized that in her life she had always been on someone else’s path. She had always sought guidance from others, but now at the age of 21, she was free to blaze a trail in whatever direction she was meant to go.

Davis finished her first Appalachian Trail hike in 5 months. “When I got to the end, I was a completely different person,” she explained.

She valued simplicity. She stopped investing her time and money into things, and started putting them into adventures, experiences and relationships. Davis also learned a lot of important lessons, not only about herself but about life in general.

“I think for me the greatest gift of the trail is that it’s taught me not to live up to other people’s expectations but to try to find and live up to my potential,” Davis said. “I don’t think God’s greatest wish for me or for you is to go through life pleasing other people. I think his greatest desire and his intention is that you find who you are, you find the things that you love, you find the things that light you up, and then live out those gifts to their fullest potential.”

Little did Davis know that she would later go on to become the record holder for the fastest woman ever to complete the Appalachian Trail or that she would become a published author or get to recount her beloved memories on the trail for many years to come as an inspiring public speaker.

Davis left listeners with a final statement, an encouraging charge that she offered for anyone who may feel weary or directionless. She said, “My prayer for you is that you find the path that God made for you. It’s probably not a literal dirt trail, but I wish you all the best as you face the adventure, the obstacles, and the excitement of your own trail.”

Olivia Halverson is a journalism and mass communication major and a news and feature writer in the Division of Marketing and Communication.