Published on April 9, 2018 by William Nunnelley   Share this on: 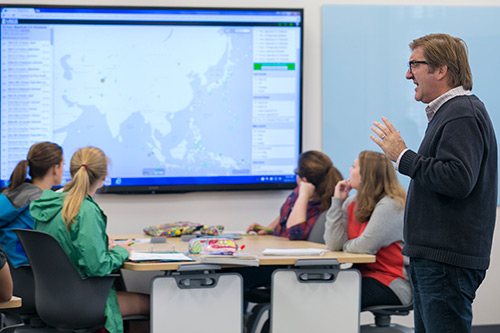 How is the best way to use the last five minutes of a class? As a faculty member trying to cover an important block of material, do you speed ahead to get to the end of the story?

As tempting as this might be, one expert in effective lecturing would say no.

“It might be better to pause and summarize what you’ve already talked about in those closing moments,” said Eric Fournier, director of the Center for Teaching, Learning, and Scholarship (CTLS) at Samford University.  “You can get to the rest of the story in the next session.”

He was quoting Todd Zakrajsek, a noted clinical psychologist from the University of North Carolina and expert on dynamic lecturing. Zakrajsek joined Fournier in presenting a faculty development workshop for Samford faculty April 6.

“The focus was on dynamic lecturing, and how to take a more balanced approach to presenting information,” said Fournier. About 70 Samford faculty enrolled in the session. “It was about Samford faculty investing themselves to become better teachers,” he added.

For faculty who have honed their lecturing approach over the years, “there still are ways they can make small changes to become more effective without reinventing themselves,” said Fournier.

“One is to stop after about 15 or 20 minutes to give the students a five-minute break to talk among themselves or draw a diagram on the material covered. Another thing faculty can do is provide an organized background sheet on the material being covered.”

And then there’s that willingness to resist the temptation to try to get one more thought in before it’s time to go.

“Some faculty already are using some or all of these techniques,” said Fournier, “but it was good for them to have their approaches confirmed.”

Zakrajsek presented two workshop sessions based on his book Dynamic Lecturing. He underscored the value of breaking up lectures with short periods of activity such as having students talk about the subject among themselves. “After 12 minutes, stop the lecture and do something else,” he said.

Educators began moving away from lectures as the primary teaching tool in the early 1990s, Zakrajsek noted, and the trend has continued until the present day. Some have abandoned lectures altogether.

Are interactive, engaged classes more effective than the lecture approach? “That is not a defensible statement,” he said.

Zakrajsek said an effective class has three steps: get and maintain the students’ attention, make sure they understand the topic, and inject something of value or interest that they will remember.

Samford pharmacy professor P. J. Hughes said the idea of segmenting classes into “chunks of time” for lecture and discussion and dividing students into small chat groups makes a lecture class “more interactive and engaging.”  He added, “A lot of these activities are about the community aspects of a class.”

The program and another session April 5 for new Samford faculty members were sponsored by the CTLS, McWhorter School of Pharmacy, School of the Arts and Samford’s Quality Enhancement Program.