Published on May 2, 2018 by Kristen Padilla and Sarah Waller   Share this on: 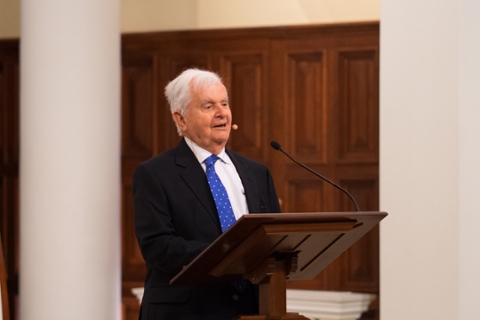 “In the next two decades, with the advancing in aging by three more decades of life expectancy, dementia will explode within family and community life,” James M. Houston, world-renowned scholar in Christian spiritual theology, told an evening crowd gathered at Beeson Divinity School’s Hodges Chapel April 26. “So, we speak, then, in great urgency.”

Houston’s public lecture, “Building a Dementia-friendly Community through a Framework of Faith,” was given as part of a visit to Samford University through a grant Cognitive Dynamics Foundation received earlier this year from the Central Alabama Aging Consortium. The purpose of the grant is to provide resources and education to faith communities in the Birmingham and Tuscaloosa areas in collaboration with their partners, Faith United Against Alzheimer’s and Dementia Friendly Alabama.

A longtime friend of Beeson Divinity School, Houston was a colleague of C. S. Lewis, a founding father of Regent College in Vancouver and cofounder of the C. S. Lewis Institute in Washington D.C. He also was the primary caregiver of his late wife, Rita, who had dementia.

In his lecture, Houston outlined four necessary components for building a dementia-friendly community through a framework of faith.

First, we need a new compassion for an expanding world of dementia care.

“We are to remind ourselves that we are intrinsically relational beings,” he said. “We are all made in the image of God. And the primary commandment is, ‘Thou shalt love thy neighbor as thy self.’”

“Could it be that God will use dementia to call us to repentance from our narcissism?,” Houston asked. “As the compassionate God, he would embrace us into a whole ecological environment of compassion where we minister one to another.” The first step toward compassion is “simply looking into the eyes of someone who is depressed.”

Second, we need a new focus on the distinctives of Christian emotions within families challenged by dementia.

“It was and remains a unique expression of our human friendship that God has embraced us in his arms,” Houston said. “That is why as Christians we need to distinguish natural and cultural emotions as contrastive with Christian emotions.”

When Houston’s wife, Rita, was suffering with dementia, he would rub her hand or touch her face with her favorite perfume. Her face would light up as the smell would bring up a memory.

“At the same time the sense of smell worsens as people get old, as old people become unaware of the smell of their dirty clothes or that they need to wash their bodies,” Houston said. “Knowing this we can be less judgmental about dirty old people, seeing their lack of hygiene not judgmentally but compassionately.”

Third, we need a new community of friendship to love and not to fear.

“Fear is the basic human emotion,” he said. “For Jesus, faith is the opposite of fear.”

“Fear wears a mask, never recognizes faces. It breeds distrust. It destroys relationships. Since we are created intrinsically relational, fear destroys our humanity. That’s why all religions deal with fear,” Houston continued. “But the mission of Jesus was to destroy fear. So much of our life is all about ministry. But the revolution of Jesus is all about friendship. We’re not primarily called to ministry, even to healthcare or to dementia care, we’re called to friendship, to be the friends of God.”

Four, we need a more comprehensive theology of faith and emotions for all Christians today. Houston said there are at least seven Christian emotions: praise, grace, faith, peace, compassion, love and joy.

“Was creation first? No; praise precedes creation,” Houston said about the first emotion. “The purpose of all creation is that it would praise God.”

Speaking of the second emotion, Houston said, “Since Christ is the embodiment of grace, it’s not a thing. Grace is a divine relationship.”

These seven Christian emotions are necessary for a Christian community of dementia care, he concluded.

Earlier in the day, Houston also spoke to students, employees and local health care professionals in Samford’s College of Health Sciences during lunch, discussing the topic of caring for individuals with dementia.

“For those living with a family member afflicted with dementia, it is far better to face its full challenge than deny its existent,” Houston said. “It is all about how we face the challenge of fear. For fear is a basic emotion, but it can affect all other emotions—positively or negatively.”

In recalling his wife’s final years, he says he does not relive his memories through a negative lens, but instead, he remembers how it was a privilege to care for his wife and to be her memory keeper. “There is only a thin membrane between this life and the life to come. She feels closer to me now than when she was alive.”

When asked what advice he would share with health care professions who care for patients with dementia, he said to pray and have compassion. “We are all made in the image of God; it’s important to always remember this,” he said. “A face can do more for health care than anything else.”

Daniel C. Potts, founder and president of Cognitive Dynamics and Fellow of the American Academy of Neurology,  said, “We consider ourselves blessed in double portion for the opportunity to be in the presence of Dr. Houston. His immense intellect, wisdom, faith and humility are deeply impactful, and his compassion cuts to the core of what we are trying to promote in this dementia—friendly initiative.”