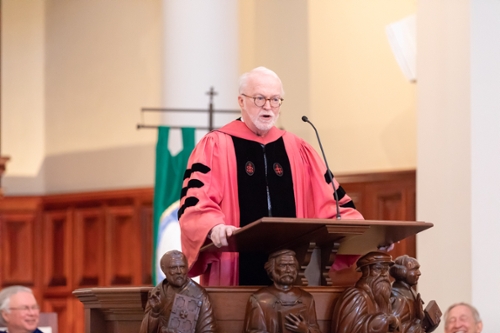 Timothy George, founding dean of Samford University’s Beeson Divinity School, announced May 16 that after 30 years he will step down as dean at the end of the 2018-19 academic year. At that time, he will transition to a new role within the divinity school faculty as a research professor.

George came to Birmingham in 1988 to start a divinity school on the campus of Samford University at the behest of Ralph Waldo Beeson, the divinity school’s benefactor, and then-Samford president Thomas E. Corts. Under George’s leadership, Beeson was established as the first divinity school at a Baptist college or university in the United States.

Ralph Waldo Beeson, who provided what was then the largest gift from a living individual in Samford history to establish the divinity school that is named for him and his father, wanted the school to be confessional, evangelical and interdenominational. His vision was that it would be a place that trains “pastors who can preach.”

During George’s tenure he has overseen the design and building of Andrew Gerow Hodges Chapel, which was dedicated in 1995; established a world-class faculty known for its excellence in publishing, teaching and church-community influence; and most recently presided over the installation of Robert Smith Jr. as the first Charles T. Carter Baptist Chair of Divinity, one of eight endowed chairs. But, George said he is most proud of the nearly 1,300 Beeson alumni serving in ministry in every inhabited continent of the earth.

“I think back over these past 30 years eucharistically,” George said. “Eucharist is one word for the holy meal Jesus gave to his disciples, but it also means thanksgiving. Grace and gratitude are closely related. God’s blessing on Beeson Divinity School for the past three decades calls us to reflect on both.

“I am grateful to God for calling Beeson Divinity School into being in 1988; for the vision and resources of Ralph Waldo Beeson, our founding benefactor; for wise and supportive university administrators, including the two presidents, five provosts, and four associate deans with whom I have worked; for a superb faculty and faithful staff; and for the host of students who have been formed for a lifetime of ministry in this good community of faith and learning,” he continued. “I am grateful for donors, advisers and friends who love us and support our work. I am grateful for churches and mission movements who partner with us to advance the work of the gospel in our time.”

Michael Hardin, Samford provost and vice president for academic affairs, said he’s grateful George will remain at Samford during his next phase of ministry.

“For 30 years, Dr. George has served with great wisdom and distinction as Beeson Divinity’s School’s first and only dean,” Hardin said. “Several weeks ago, he very kindly informed Samford’s administration that he was prayerfully considering this next step in his distinguished career. We are grateful for both his continuing leadership and his reassurance that, upon his departure as dean, he will ‘just be moving offices’ within the school.”

Hardin added that details of the search for George’s successor will be announced in the fall.

“Thirty years ago, at my installation as the founding dean of Beeson Divinity School, I said that the future of Beeson was as bright as the promises of God,” George said. “It still is.”

Samford is a leading Christian university offering undergraduate programs grounded in the liberal arts with an array of nationally recognized graduate and professional schools. Founded in 1841, Samford is the 87th-oldest institution of higher learning in the United States. The Wall Street Journal ranks Samford 1st nationally for student engagement and U.S. News & World Report ranks Samford 37th in the nation for best undergraduate teaching and 97th nationally for best value. Samford enrolls 5,758 students from 48 states and 22 countries in its 10 academic schools: arts, arts and sciences, business, divinity, education, health professions, law, nursing, pharmacy and public health. Samford fields 17 athletic teams that compete in the tradition-rich Southern Conference, and ranks 1st nationally for its Graduation Success Rate among all NCAA Division I schools.
Manager of Marketing and Communication
Kristen Padilla
kpadilla@samford.edu
205-726-2398