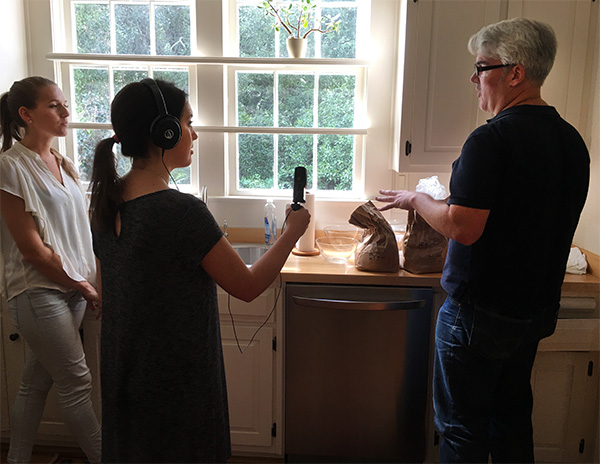 The Samford Traditions & Oral History Recording Initiative (STORI) at Samford University recently posted the last of four student-produced podcasts that explore some of the diverse food traditions found in Alabama. So far, the podcasts have been downloaded more than 900 times by curious listeners around the world.

The recordings, featured among STORI’s Sam.wav podcasts, were selected from projects completed in Samford history professor Erin Mauldin’s Food and History course, which had its origins in her own work as a Samford history and biology double-major a little more than a decade ago. Studying with professor Jonathan Bass, Mauldin produced a research paper on Sister Schubert’s Rolls, learning along the way what different kinds of bread reveal about southern history. She now explores the broader subject as an award-winning environmental historian who sees in food the story of how humans have shaped the world according to what we eat. “You have so many different types of people’s history on your plate,” she said, “and you have a representation of global connections stretching back into ancient times.”

In 2015, Mauldin proposed a Food and History course that any professor in her department could teach, adapting it to personal scholarly specialty. She led the first course in fall, 2017.

“I wanted to introduce the ways American identity and American food have often been linked, and how they’ve changed over time,” Mauldin said. She also wanted to explore the ways digital humanities could be integrated into the application of historical knowledge. “Instead of just writing a research paper, which history students do in almost every class, I wanted to do something that showed students how you can apply the themes of the class in a more practical way, particularly since we had a range of majors,” she said. She invited STORI director Michelle Little and student podcast producer Claire Davis to collaborate on an oral history component, guiding the students through the techniques and technologies of interviewing and podcasting. “I was so lucky to have Michelle in class as a way of professionalizing what we were doing, but also so we could experiment with how oral history could be integral to coursework,” Mauldin said.

“This project, particularly, got me interested in how interviewing and food go so well together,” Little said. She joined Samford nutrition and dietetics professor and Food Labs Director Pat Terry, and students Ann Potter and Keely Smith in Marion, Ala., as the students interviewed James Beard award-winning chef Scott Peacock. She learned that Peacock, one of Southern Living magazine’s 60 Southerners of the Year for 2017, also interviews people about food and also finds that talking about food “is the perfect segue into any topic,” putting people at ease and opening the door to powerful memories of home, family and culture. “That’s why oral history was so right for this class,” Little said.

Mauldin divided her 22 students into teams of two each, to create 11 projects focused primarily on immigrant foodways, including Malaysian, Filipino, Nigerian, Chinese, German and Italian traditions, but also including Peacock and women who prepare dinners at Shades Mountain Baptist Church. In addition to the hours of interviewing and transcription, the students had to write scripts, produce podcasts, cook selected recipes, read at least 100 pages per week, complete a short paper each week and write 10-page research papers on subjects related to the cuisine they explored.

The final exam included a communal meal of the documented recipes, prepared by the student researchers in Samford’s Department of Nutrition and Dietetics kitchens. “We had an amazing spread of dishes,” Mauldin said. The students listened to their podcasts as they worked and ate, and chewed on tough questions about how they decided what to cook, whose heritage the dishes represented, who did the cooking, whether gender played any role, and whether or not a poor person could have made the recipe if, for example, it required transportation to gather ingredients. “It’s not abstract,” Mauldin said. “It’s present in that casserole.”

Students embraced the challenge. “The most common thing I saw in the evaluations apart from ‘this was a lot of work,’ was ‘this has totally changed the way I look at what I eat’,” Mauldin said.

The work also should pay dividends as students continue through their undergraduate work and careers. “With oral history, they’re learning how to interact with people, which is valuable in every single field you’re going into,” Little said, adding that students also learned to work with specialized technology. “Those are hard skills that are transferable anywhere,” she said. “In every field, you’re going to need more and more digital tools.”

Jonathan Lawson, a history major who aspires to a career in financial planning, acknowledged the professional value of his oral history experience and undergraduate major. “Samford’s history program encourages students to think critically, synthesize large amounts of information into succinct and clear arguments, and problem solve,” he said. “These are skills that every financial planner must utilize every day.”

Lawson and classmate Spencer Bissell interviewed Nigerian Samford student Amam Rochas for their Food and History project. “Not only were we able to discuss Nigerian cuisine and the impact it has had on Amam’s life, we actually prepared two traditional dishes, drinking gari and fried plantains, with Amam in his apartment,” Lawson said. “It was an incredible experience."

STORI, the only active oral history program in the state, records stories that otherwise wouldn’t be saved. The experience of students in Samford’s Food and History course highlights the program’s ability to also create transformative assignments by immersing students in history, introducing them to people they otherwise would not encounter and fostering communication skills that will distinguish them in any career. “You can read it in a book, you can hear it in a lecture, but it doesn’t have the same impact as when they’re out there talking to the people,” Little said. “It cements the education experience.”