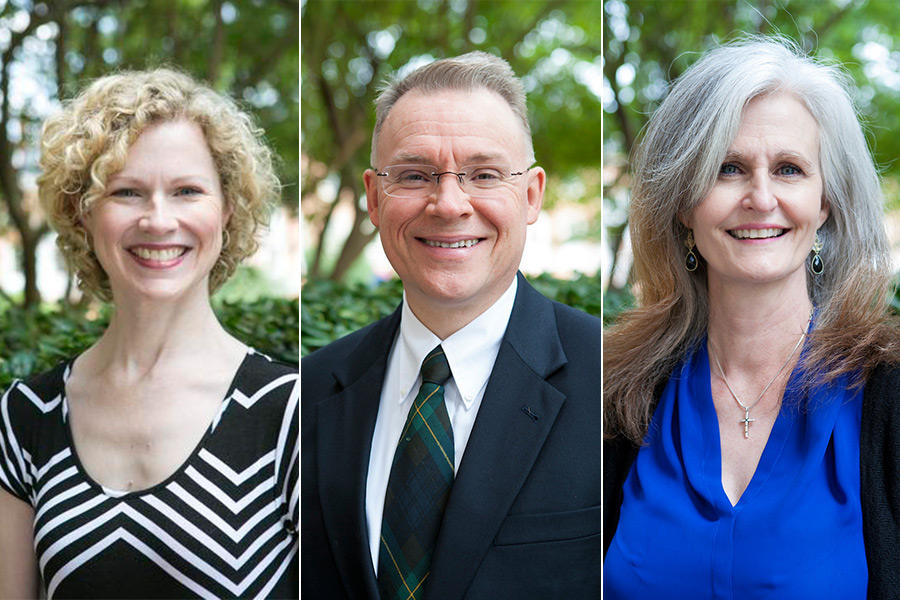 Cross received the John H. Buchanan Award for Excellence in Classroom Teaching and Cates received the first Outstanding Scholarship Award for sustained scholarly contribution to the faculty member’s discipline and the academy over their career. The Buchanan Award is named for a former longtime trustee of the university.

Jan Paine, director of undergraduate student services in Samford’s Ida Moffett School of Nursing, received the Bill Nunnelley Award recognizing outstanding job performance by a non-faculty employee whose work regularly and consistently exceeds expectations and reflects a high level of service, trustworthiness and respect. The award is named for a longtime employee.

Cross has taught at Samford since 2000. She has served as faculty-in-residence at Samford’s Daniel House in London; directed the Christian Women’s Leadership Center (2000-2008); and led faculty-student cadres for academic and spiritual development. Prior to coming to Samford, she taught at Judson College, worked for The Alabama Review, and did post-graduate studies at St. Andrews University (UK)

She holds the Ph.D. and M.A. degrees from Auburn University and the B.A. in history from the University of Alabama-Huntsville.

Paine has worked in Samford’s nursing school since 1990. She received the Alabama League for Nursing’s 2000 Lamplighter Award for exemplary achievements in service to others. She holds the M. A. E. degree in education from the University of Alabama at Birmingham and the B. S. in education from Auburn University.
Samford is a leading Christian university offering undergraduate programs grounded in the liberal arts with an array of nationally recognized graduate and professional schools. Founded in 1841, Samford is the 87th-oldest institution of higher learning in the United States. The Wall Street Journal ranks Samford 1st nationally for student engagement and U.S. News & World Report ranks Samford 66th in the nation for best undergraduate teaching and 104th nationally for best value. Samford enrolls 5,683 students from 47 states and 19 countries in its 10 academic schools: arts, arts and sciences, business, divinity, education, health professions, law, nursing, pharmacy and public health. Samford fields 17 athletic teams that compete in the tradition-rich Southern Conference, and ranks 3rd nationally for its Graduation Success Rate among all NCAA Division I schools.
Director of Communication
Holly Gainer
Hgainer1@samford.edu
912-344-8443