Published on October 1, 2018 by Kristen Padilla   Share this on: 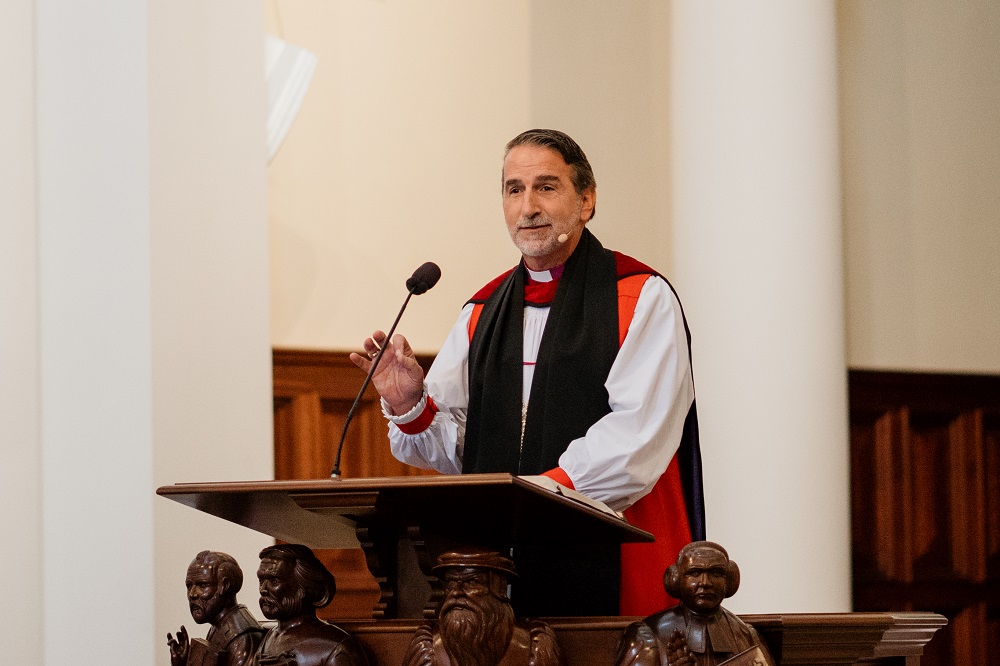 Beeson Divinity School’s inaugural Anglican Theology Conference, Sept. 25-26, was an international event, drawing Anglicans from Kenya, Egypt, Hong Kong, the South Pacific, Canada and the United Kingdom to Samford University to discuss the question posed by the conference, “What is Anglicanism?”

Sponsored by the Institute of Anglican Studies at Beeson, the conference attracted more than 200 people to hear 11 presenters, hailing from a wide swath of orthodox Anglicanism, give 20-minute papers grappling to define Anglicanism.

“Anglicanism is at a crossroads,” said Gerald R. McDermott, Anglican chair of divinity and director of the institute. “The battles between progressivism and orthodoxy in Anglicanism are largely over—at least theologically. The ground is now clearing, although residue from the battles remains. Orthodoxy is attracting the vast majority of worldwide Anglican provinces, where the center of gravity is in the Global South. Now is the time for orthodox Anglicans to figure out what is distinctive about orthodox Anglicanism.”

The conference, however, exposed the differences even among orthodox Anglicans, McDermott said. It revealed both optimism and pessimism about the future of the Anglican communion. “But it also opened up new grounds of agreement that are being explored in fresh ways.”

Archbishop Foley Beach of the Anglican Church in North America delivered his paper as part of the divinity school’s weekly Tuesday morning chapel service. Beach’s sermon-lecture was titled, “The Rise of Neo-Pagan Anglicanism,” in which he said that neo-pagan Anglicanism has attempted to replace historic, orthodox Anglicanism through revisionist theology and liberal morality.

“Unsuspecting and needy provinces and dioceses around the Communion are taken in by their monetary generosity, the airplane tickets, lavish meetings and friendship, not realizing what is in the Trojan Horse being brought into their church,” Beach said. “We live in a world in need of the gospel of Jesus. Heresy is a decadence that cannot be tolerated within the church because it steals our time, our resources and our energy.”

Mouneer Anis, bishop of the Episcopal/Anglican Diocese of Egypt, began his paper by quoting the former archbishop of Canterbury, Lord George Carey, who said, “You don’t have to be English to be Anglican.” This statement by Carey given during an Anglican evangelism conference in the mid-1990s opened Anis’ eyes to see how richly diverse and global the Anglican Communion is.

According to Anis, today’s Global South Anglicans represent about 80 percent of the Anglican Communion’s members. In Egypt alone, the number of Anglicans has grown from 2,000 in 1976 to 15,000 in 2018.

“As we go through this difficult time, we need to trust God’s promise that the gate of Hades will not overcome the building of his church,” Anis said. “He will protect his church. Our role is to remain faithful until Jesus comes again.”

“The heart of Anglicanism from the latter half of the 20th century on has been in Africa and in Asia,” he said. “The average Anglican is darker skinned, poor and walks to and from their church meetings each Sunday. It’s a perspective that we need.”

The problem that Anglicans face today is nothing new, Pearson added. The root of the problem is sin. Pearson’s clarion call to Anglicans was to return to a fixed point on Jesus Christ with a renewed commitment to orthodoxy, the gospel and preaching.

Beeson alum Jonathan Douglas Hicks, dean of studies at Trinity School for Theology and Ministry at Airahu in the Solomon Islands, attended the conference and left feeling hopeful about the future of Anglicanism.

“The What is Anglicanism? conference impressed with me the sense that Anglicanism, at its best, is an instrument in the hands of God toward a more meaningful unity amid the whole Body of Christ,” said Hicks. “The charity, honesty and conviction with which many of the contributors mapped out hope for the Anglican future exemplifies the best of the Anglican way.”

“I was pleased to be asked to participate in the conference as a Baptist voice and was very glad my friend Rusty Reno brought a Roman Catholic perspective, because Anglicanism is a church that reaches out in several different directions,” he said. “Anglicans and Baptists have sharp differences on some key issues, notably on infant baptism and church governance. But there are also many points of contact and commonality. Even around these controverted issues there is progress towards convergence as we have seen in the recent Anglican-Baptist international dialogue.”

McDermott announced at the conference that Crossway, a nonprofit Christian publishing house, will publish the conference papers in a book titled, The New Orthodox Anglicanism, in 2019. Crossway plans to also produce the book in two cheaper versions (paperback and Kindle) in order to make them accessible for Anglicans in the Global South.

The second Annual Anglican Theology Conference will take place Sept. 24-25, 2019, on the theme, “The Jewish Roots of Christianity.”

“We want to make a contribution to worldwide Anglicanism by addressing a significant theological issue each year, bringing some of the best scholars and leaders to address it and making their reflections available through a book,” McDermott said.

“At Beeson we practice an ecumenism of conviction, not an ecumenism of accommodation,” George said. “Beeson is a place where Baptists and Anglicans alike, along with believers from other denominations, have been able to find koinonia in our core commitment to Jesus Christ and in our love for his Body—the church, the one, holy, catholic and apostolic church.”

Go to the Institute of Anglican Studies on the website for more information about the work of the institute and future conferences.