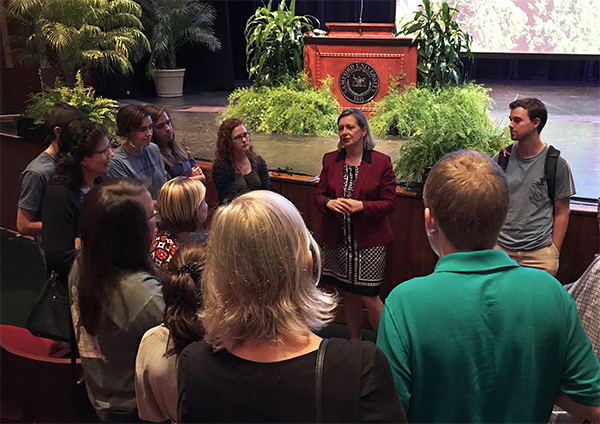 Computer science pioneer Rosalind Picard offered a refreshingly optimistic view of the future of human/machine interaction in a public lecture at Samford University Oct. 4. Picard– an inventor, electrical engineer, and founder and director of MIT’s Affective Computing Research Group–presented Samford’s 2018 J. Roderick Davis Lecture, which spotlights some of the most influential thought leaders and important issues of our time.

The technological future, Picard and her colleagues have realized, might be less about a dominating Artificial Intelligence (AI) and more about Extended Intelligence (XI) that works alongside humans, assisting us rather than replacing us, and promoting the human connections that make our lives better.

Picard described impressive practical applications of artificial intelligence and machine learning developed from the work of her lab and the companies she co-founded. She emphasized one product in particular, the Empatica company’s Embrace wearable sensor, and described how the epilepsy management device developed from new experiments with the relatively old technology of electrodermal activity (EDA) sensors.

Picard and her colleagues were researching how EDA is related to brain activity (one of three types of embryonic human tissue is the source of both skin and neural tissue) using MIT students as their subjects. When one of the students asked to borrow an EDA sensor to track his autistic brother’s brain activity over the Christmas holidays, Picard gave him two, and advised him to use only one on the brother’s arm, keeping the other sensor as a spare. Instead, the student applied one sensor to each arm, which appeared to cause a malfunction in one sensor, as revealed by the data it transmitted to Picard.

When Picard saw a dramatic spike in the brother’s skin conductance on only one arm, she called her student and asked him if something had gone wrong with the technology, or if he had observed anything unusual at the time of the spike. The student consulted his diary and reported that his brother had suffered a grand mal seizure at the time of the spike. A call to another student’s father, a prominent neurosurgeon, revealed that the hair on one arm has been observed to stand a short time before some seizures.

Now Picard’s group began experiments to determine whether or not wearable technology could exploit the connection between brain and skin to reliably alert humans to impending seizures, including those which result in Sudden Unexpected Death in Epilepsy (SUDEP,) which Picard said is second only to strokes among neurological causes of death, and which might be related to Sudden Infant Death Syndrome.

The research was conclusive and positive, the FDA approved the resulting technology and the watch-like Embrace now sends phone alerts to caregivers when it detects the skin’s response to a seizure. Picard related the story of a mother who received an alert from her young daughter’s device, ran to the girl and found her unresponsive and turning blue. She roused the girl, restarting her flatlined brain activity and saving her life.

Picard emphasized that the two most important factors in preventing SUDEP are taking prescribed medication and having a caregiver on hand to do what the girl’s mother did–stimulate the brain with speech and touch. The technology, Picard said, is not taking over a human role, but rather is facilitating a human connection that is a matter of life and death to those at risk of SUDEP.

Can this technology have a role in addressing a growing worldwide epidemic of severe depression and suicide? Picard noted that depression is on track to be the number-one human disease burden by 2030, causing more death and disability than cancer.

When Picard learned that there currently is no consensus on how to address this devastating trend, she thought engineering might be able to help. Could the brain/skin connection demonstrated by the new seizure monitoring technology help manage this crisis as well? Her lab’s research gives her hope that it can. Wearable technology can now predict with 78-87 percent accuracy a subject’s mood on the evening after a measurement. Forewarned is forearmed, and in this case forearms forewarn, as sensors coupled with machine learning and AI guide the wearer away from activities or situations associated with stress and depression, and toward the positive, face-to-face human interaction associated with calm and resilience.