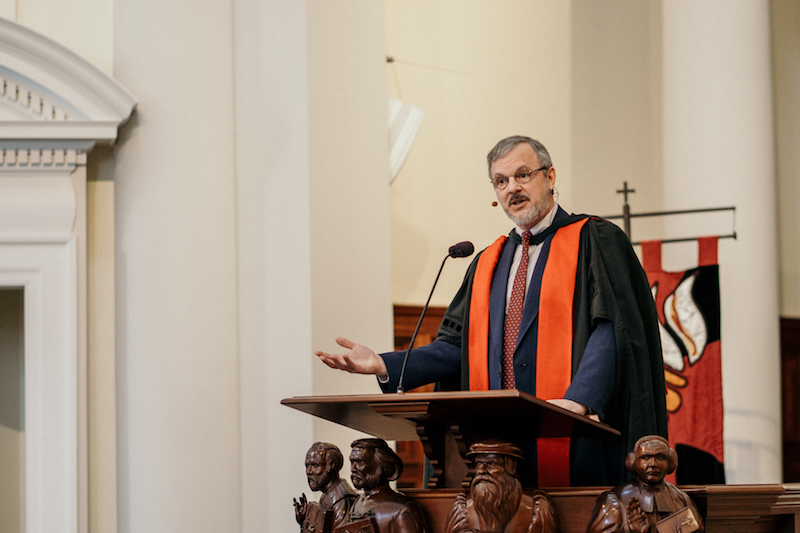 On Oct. 31, 2018, the legacy of scholarly and spiritual reflection on the Reformation begun by Nicole was extended by Kevin J. Vanhoozer, research professor of systematic theology at Trinity Evangelical Divinity School.

“We must be always reforming because we are never always faithful,” he said.

The way to do this is to unify around Scripture, reading the Bible rightly alongside other Christians, and taking a posture of humility that comes from exhibiting the fruit of the Spirit.

“Rightly understood semper reformanda (to be always reforming) does not bless either preservation for preservation’s sake or change for change’s sake.”

Quoting theologian Karl Barth, he said, “What counts in the church is not progress but reformation.”

In addition to hearing, another prerequisite to be always reforming is by having a tender heart.

“Hearts become hard by positively sinning; that’s how you harden spiritual arteries,” Vanhoozer said. “The remedy for the hardened heart is a renewed heart, one that nevertheless always needs to be reformed.”

Giving Nicole the “last word” in his final lecture, Vanhoozer said that Nicole once posed three questions to ask when thinking about how to deal with someone who differs from you: “What do I owe them? What can I learn from them? How can I cope with them?”

Nicole’s answer to these questions demonstrates the way forward in achieving the kind of reformational unity Vanhoozer argued for: through charity.

“I think we need to get past the fear that casts out love. We need to stop looking at the conflict of Protestant interpretive communities simply as a problem to be solved or a battle to be won,” he said. “Can we see it rather as a teaching moment, a moment for witness and possibly a moment for our own spiritual formation?”

Oct. 31, 2018 marked the beginning of the 501st year of the Protestant Reformation, thus concluding year-long activities commemorating the Reformation’s 500th anniversary. In 2017, Vanhoozer served as the co-chair of the drafting committee and primary drafter of the Reforming Catholic Confession, a document to commemorate the 500th anniversary by calling Protestants across denominations to unity (also known as catholicity) around core biblical truths.

While at the divinity school, Vanhoozer also recorded a podcast with Timothy George, Beeson’s founding dean, in which George asked him to reflect on the impact and importance of the 500th anniversary of the Reformation and the confession. Once again, Vanhoozer gave the last word to Nicole.

“As to the long-term prospects of the Reformation and its significance, that story is still being written,” he said. “I think Roger Nicole is right. There are lots of challenges facing the church, but we don't need a new Reformation. We just need to finish the old one.”

Listen to Vanhoozer preach in chapel

Listen to Vanhoozer’s conversation on the Beeson podcast