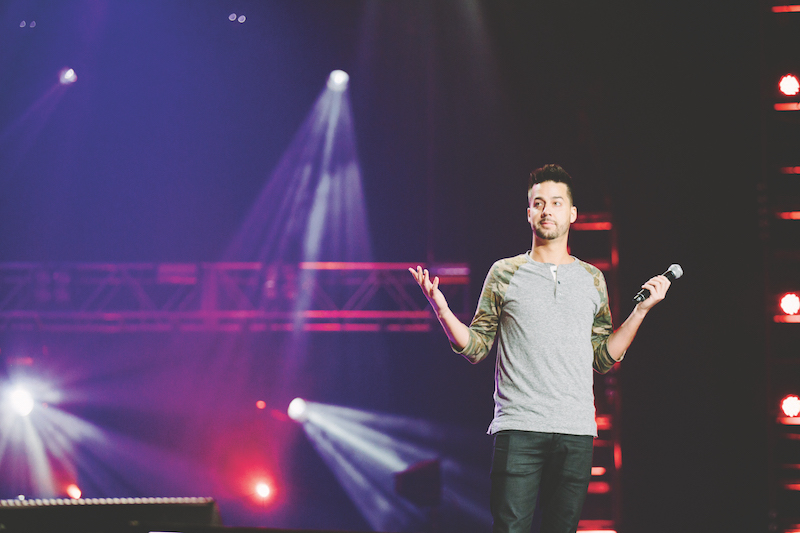 John Crist, a 2006 journalism and mass communication graduate from Samford, is the next big thing in stand-up comedy. When it comes to his comedy, Crist writes what he knows. As one of eight children and the son of a pastor, Crist knows Christian culture. His viral videos, which have garnered more than 1 billion views, bridge the gap between faith and contemporary culture. Crist’s comedy resonates with audiences of all ages. His most recent tour—The Human Being Tour—sold out coast to coast and welcomed more than 100,000 people across 55 cities last fall. Due to popular demand, Crist will make stops in an additional 43 cities this spring. We caught up with Crist to talk about his comedy and calling.

When you decided to pursue comedy as a career, did you intend to use it to share your faith?

Oh man, let’s see. I think it was actually closer to the opposite. When I started out in the comedy clubs, I shied away from Christian topics. I just wanted to do stand-up comedy for everyone, and I was scared that if I did something that was too niche Christian, that people wouldn’t get the joke.

But I heard someone say that if you want to be a truly transcendent comedian, you need to write about what you know. So growing up in church, dad being a pastor, homeschooled, working at Chick-fil-A. . . that was my life, that was my mindset. So I started talking from that angle. Sure enough, everyone seemed to relate. I think if you grew up in America, even if you aren’t a Christian, you know who Jesus is. You know that churches meet on Sundays. You know who David and Goliath are. You know about Noah’s Ark. I try not to get too niche Christian in my show. I try to stick to topics everyone knows about.

How do you think your work influences perceptions of Christianity?

We’ve thought about this a lot as we put together our tours. It's funny because my most successful videos are the ones that aren’t specifically Christian, like Every Parent at Disney or Honest Football Coach. These are the types of people who are coming out to the live shows . . . often times people who have never been to church or at least not in a long time. I feel like the live show really humanizes Christians.

We’re performing in more and more comedy clubs and theaters these days. Even when we do shows in churches, I feel like if someone who wasn’t a church-goer came to that show, he or she would leave the show thinking, “Oh, Christian people are just like me.” Christian or not, everyone needs to laugh.

Do you see your comedy as a part of your calling as a Christian? Is it a ministry for you?

One of my favorite quotes of all time is, “The Christian shoemaker does his duty not by putting little crosses on the shoes, but by making good shoes because God is interested in good craftsmanship.”

That’s it right there. I, for sure, believe that God put me on this planet to make people laugh, yes. But people misrepresent God all the time by making specialty Christian products that are not good. If you want to classify me as a Christian comedian or as just a comedian who is a Christian, that’s up to you. I just want to make great comedy.

Ministry is a strange word to me, a word I see misused all the time. But we do get hundreds of emails and letters from people saying things like, “I'm struggling with depression, and your comedy has lifted my spirits.” “I deal with chronic pain, and your comedy makes me feel better.” We got an email one time from a lady who said she has cancer and is going through chemo. Whenever she gets done with radiation she goes straight home and watches John Crist videos because it always makes her laugh. So if you think about it in those terms, then it is for sure a ministry.

What’s the most difficult part of what you do?

Maybe the worst part about the job is the people who don’t understand the jokes. We poke a lot of fun at Christian culture, and sometimes people just don’t get the joke. I love the local church. I think the local church is our only hope for the future but that being said, culturally we do some weird quirky stuff. It's hard when people miss the point of the joke or question my faith or tear me down for whatever reason or say that a certain joke is across the line. But that’s a very, very small minority of people. All across the country the venues are packed full of people who get the joke and are ready to laugh. That’s what keeps me going.

What do you attribute your success to?

Comedy is different than performing music or even a sporting event in the way that the comedian needs the crowd to succeed. Not only do I need the crowd, I rely on them. I can only say what you can relate to. So I attribute my success to the relatability of it all. I’m certainly not popular enough to make a video go viral. I rely on the people who watch it to like it, relate to it and share it. So if you don’t relate to it, you don’t share it. I think my point of view, childhood and life experiences are very similar to a lot of people and that’s why people share the videos and come to the shows.

What is one thing someone would be surprised to learn about you?

I'm actually very introverted. I gain energy from being alone. I like the crowds at the shows but I think it has all driven me more and more inward.

What do you hope your legacy will be?

For a guy who eats off the dollar menu and buys the majority of his clothes at Target, legacy is a tough idea to undertake. Most people would never get asked a question like that. My goal has always been very simple, and I think it's the same for every artist—to get what's in my heart, out. To get what’s inside me, expressed. What the world decides to do with it is up to them. So whether it's a tweet, an Instagram story, a live show, a TV show or a Netflix special...I just want to get the ideas inside of me out to the world. That’s what brings me the most happiness and joy.

This article was published in the spring issue of Seasons magazine. Read the full issue.