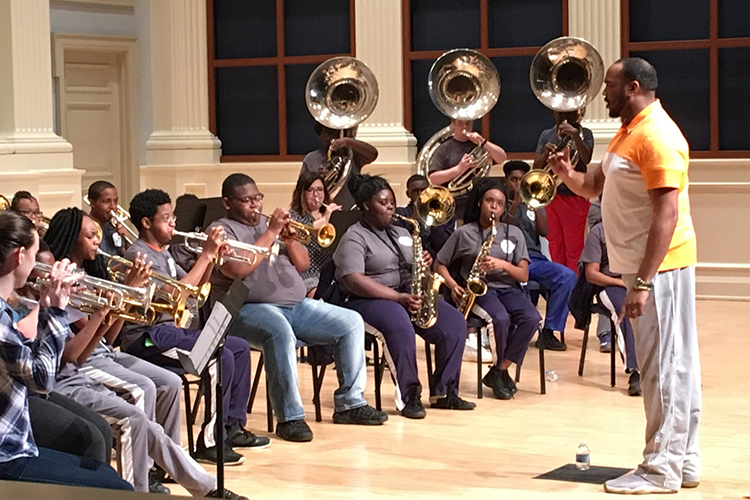 From instructional interaction and collaboration with Samford music students and faculty ensemble leaders Captain Brian Walden and Tim Heath, to a campus-wide scavenger hunt, lunch in the caf, and a greeting from University President Andrew Westmoreland on the quad, the high school band students received a full Samford welcome both as guest performers and campus visitors.

“I have been overwhelmed by the university’s support for the band members’ visit, campus performance and partnership,” Beth McGinnis, assistant professor of musicology, said.

“About halfway through the visit, Mr. Lanier, found a new name for me: ‘Auntie McGinnis.’ After working with him and his colleagues over the past two years, [we see each other] as family now,” McGinnis said. “I have come to know him through the context of my own Samford family who also welcome him and his students with warmth and great respect.”

McGinnis emphasized the nature of this mutually beneficial university-community partnership aimed at teaching all students to learn more about the culturally-rich African-American music traditions by arranging and playing together with high school band students from the region.

Both Samford and Perry County band leaders hope to expand the ongoing partnership by designing new paths for music enrichment within Perry County Schools. As part of McGinnis faculty fellowship in community-based learning with Mann Center, the center’s staff worked together to sponsor and plan the visit and later promote the collaborative performance.

“We are so pleased to support the development of community-based learning courses like Dr. McGinnis’ senior music seminar,” Allison Nanni, director of community engagement in the Mann Center said. “Studying, arranging and performing alongside fellow musicians from another region and tradition is a learning experience that neither Samford nor Perry County Schools’ students will ever forget.”