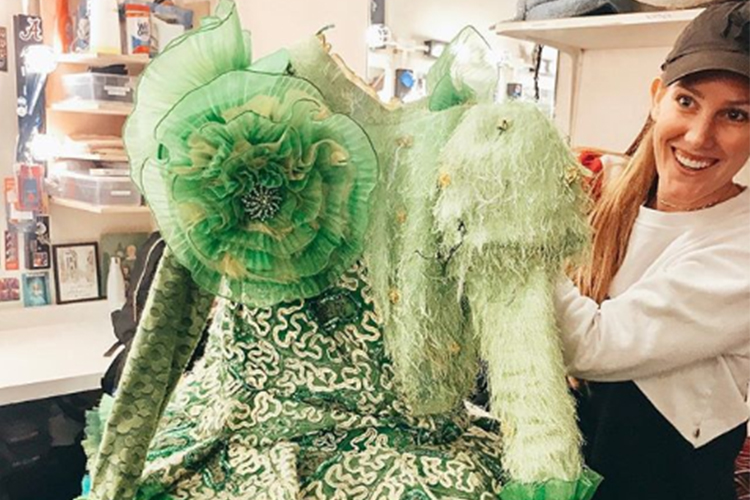 Dvornik shares her experiences working on Broadway on Instagram as @thebackstageblonde.

“Work hard and dream big.” This is the motto Teale Dvornik ’12 lives by. Dvornik, a female-ensemble dresser for Broadway’s Wicked, is perhaps better known by her online moniker “The Backstage Blonde.” In 2017, Dvornik took her popular Instagram, which displayed some of her backstage shenanigans—and her reputation as a self-proclaimed “big sister” to all of her young followers online—and morphed it into a full business sporting her nickname. It includes a blog, her own merchandise, and requests for her signature at the stage door of the Gershwin Theatre.

In between shows during a two-show day, the young entrepreneur took Broadway Direct backstage at Wicked  to discuss her journey to becoming a Broadway dresser, sports, and why sleep is the worst.

Q: What made you want to become a dresser on Broadway?

It started when I was a teenager. I felt really uncomfortable in my own skin. I became very curvy before any of my friends did, so I turned to clothes to make myself feel better about all of the crazy changes that were going on. I became obsessed with fashion, and I really wanted to be a fashion designer and a stylist. My sophomore year of college, I transferred to Samford University, and the closest thing they had to being a fashion design major, which is what I was at my first school, was being a theater major and studying costumes. My first semester of sophomore year, I was a dresser on Richard III, and I absolutely fell in love with live theater because it’s this amazing, beautiful, collaborative effort where you’re with this gigantic group of people, everyone has a different skill set, and you come together to create one beautiful product. And I just love being backstage and interacting with the crew and the actors. So I knew from that moment—it was October 2009—that I wanted to be on Broadway.

Q: I feel like we need to break down what exactly a dresser on Broadway does because it’s so much more than what your title implies.

Totally! So there are a lot of different members of the wardrobe team, starting with the costume designer. So, when a show is going into their out-of-town tryout, the costume designer chooses a wardrobe supervisor who she or he trusts to take care of the show once they walk away. Once the show is up and running, the designer steps back, and the wardrobe supervisor is the head of the show. They have an assistant, and together they hire a team of dressers to be backstage during the show to quick-change the actors into and out of costumes and keep everything organized. We also help maintain the costumes; like, if there is a last-minute repair that needs to be done, I’ll do it.

Q: Who in your field inspires you?

I feel like a normal person would list off a legendary Tony Award-winning actor or designer, but honestly, what inspires me and really gets me fired up is the history behind of all of these buildings. I am obsessed with finding out everything there is to know about these legendary theatres, including the people who performed on these stages and the art that was created in these houses. Like, Kristin Chenoweth performed on that stage that we’re sitting in front of right now. And then Wicked  lost Best Musical to Avenue Q that year. I just love Broadway history.

But honestly, the fans too. Just getting to meet these kids at the stage door, whether they be fans of The Backstage Blonde or of fans of Wicked, and just hug and love on these kids. Yeah, that’s definitely what inspires me to keep going and to keep pushing.

Q: What do audiences love about Wicked?

Well, Wicked  is just one of those rare shows that will forever be timeless. The story touches so many different people’s lives in so many different ways. The story of Elphaba and Glinda is applicable to a lot of different situations, whether it be you feel bullied at school and feel like an outcast, or if you don’t feel accepted by your own family, and even if you struggle with a disability, like Nessarose does. It also helps that there are two strong female leads guiding this whole thing. I think this show is just a perfect storm, an effusion of incredible music and a story that just so many different people can relate to.

Q: If you didn’t have to sleep at night, what would you spend your time doing?

Oh, my gosh, if I didn’t have to sleep that would be the best! I’d focus more on my business. I love being an entrepreneur. I would also definitely get a lot more writing done. I mean, balancing everything is a tricky thing for anyone. No matter what you do, you’re always trying to figure out how to juggle your friends, your family, staying healthy, working out, and performing well at your job with any outside activities that you want to do.

Q: What’s one thing that anyone visiting New York City must do other than, of course, see a Broadway show?

OK, this is going to sound lame, but hear me out: Whenever anyone comes to the city for the very first time, I tell them to do a bus tour. Sit on the top of one of those silly tourist buses and take a tour of the entire city. Because then you get to see the entire thing really fast, and if you see a neighborhood that you actually really want to explore, you can go back and check it out later.

This is an excerpt of a full interview originally published by Broadway Direct.

Dvornik is just one of many talented School of the Arts alumni with a growing career in the arts. Watch the video below to hear from other graduates on how their time at Samford prepared them to explore and thrive in a variety of career fields in the industry.