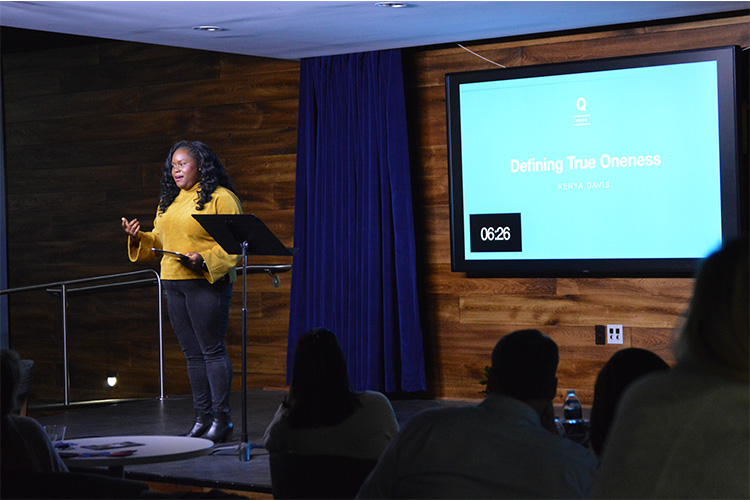 For Senior Kenya Davis, truly trusting God meant believing in the power of her own uniqueness. Davis shared this message from the Q Union stage at Harry’s Coffeehouse where she described the journey to find her own identity as a person whose social and racial differences led her to feel outcast and misunderstood by many.

She quoted Matthew 22:39 “love your neighbor as yourself” as she highlighted the process of accepting this truth. “Of course, I had heard this scripture before, and of course, I had applied to my treatment of other people, but I never considered what the verse assumes,” she said. “It assumes that I love me. And I can promise you that I haven’t always loved me.”

Davis was one of three Samford students to present at the annual Q Union event on Oct. 23. Q Union is a one-night event where three nationally broadcast speakers and three live student presenters educate, inspire and offer people of faith creative ways to respond to the difficult challenges facing our local campuses and communities.

“Simply put, the 'Q' stands for questions. The whole concept behind Q is to create space where people can engage in the biggest questions we face personally, societally, and as a Samford community,” Jon Taylor, student assistant in the Office of Student Leadership and Involvement said.

The overarching theme of the night was “Create a Better Future” where each presenter spoke on topics varying from seeking peace to talking to strangers. They offered their unique perspectives and ended their talk with a challenge to the students.

“How do we create a better future?” senior football player John Booth asked. “In short, we do it together.”

Booth spoke about his challenges with the journey to playing Division 1 football and how it affected his appreciation of the present where God placed him. He proceeded to list off name after name of the people who have been blessings in his life since coming to Samford. He thanked God for their presence in his life as he would have never met them if God had done things his way.

“I’ve always looked at my past decisions and always wondered what if I had done things differently,” junior Kenny McCanse said. “By hearing John talk about his own experiences, it reminded me that I’m not alone in this world with feeling the same way.

Between the student talks, there were three broadcasted speakers, including Malcolm Gladwell, Rebekah Lyons and Francis Chan.

“I would say that [Q Union] was really effective,” sophomore Andrew Clark said. “It led me to think about things in a different light and see other peoples’ perspectives,”

“True peace doesn’t leave one person feeling victorious and one feeling small,” Center said. “We need to see people as more significant than ourselves.”

While students heard from the speakers, they were also able to share with each other in small discussions. The student speakers will continue their leadership development with future engagement with the Q organization through training sessions and attendance at the national three-day Q conference.