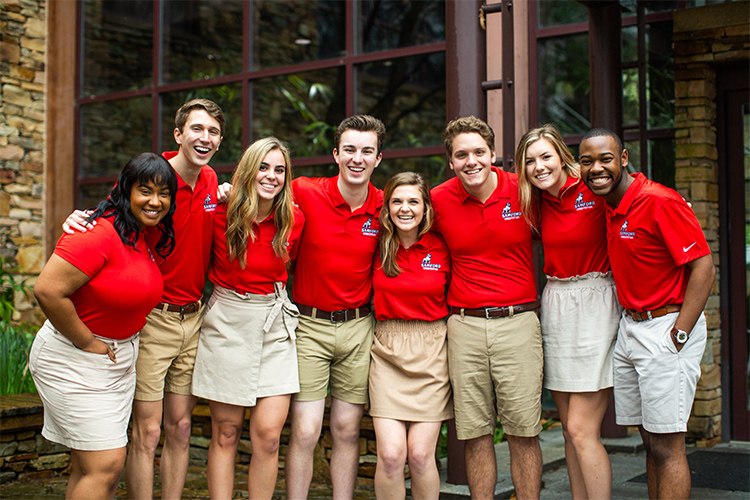 Each June, Samford welcomes hundreds of students and their parents to campus for Bulldog Days, the university’s new student orientation. This year, Samford’s Office of Admission faced the unique challenge of developing a virtual orientation to prepare incoming freshmen and transfer students for the Samford experience.

The result was a two-day online schedule delivered to more than 1,000 families, the largest number of Bulldog Days attendees ever. From June 1-23, five online orientations offered opportunities for real-time engagement with orientation leaders, academic advisers and Samford staff through both live and prerecorded sessions.

In partnership with several divisions across campus, the Office of Admission developed the virtual plan over two weeks and quickly filmed sessions in just three days.

“There was no way we could have pulled this off without the help of many offices around campus. Academic advisers worked tirelessly to ensure incoming students had a positive advising experience and class schedule. Marketing and communications, specifically, Brad Radice, Ed Landers and B.J. Millican, led our filming and livestream broadcast. Student affairs and enrollment management presented their information in an engaging format for students and parents,” said Jenn Debrecht, assistant director of admission and orientation.

The schedule included introduction information related to campus life, student services and financial services, and virtual meetings where students learned about plans of study and financing options through presentations from academic leaders, faculty, advisers and a student panel. New students and their families also connected through virtual evening events such as campus worship and a game night. While their roles are always critical during orientation, Samford’s orientation leaders and academic advisors worked especially hard this year to bring energy to the online experience.

“The orientation leaders and academic advisors really stood out. Their goal was always to serve and welcome as if students were on campus. They offered a personal experience and connected with students even though it was through a screen. It was amazing that we could still build community virtually,” Debrecht said.

Their efforts received positive feedback from many participants.

“Samford families have been very encouraging,” Debrecht said.  “Students have been surprised at how fun virtual Bulldog Days has been. Our typical late-night karaoke was replaced with a competition among orientation groups that turned out to be really dynamic! Parents have appreciated the information shared in a personal way.”

Samford will host the final Bulldog Days in late August.