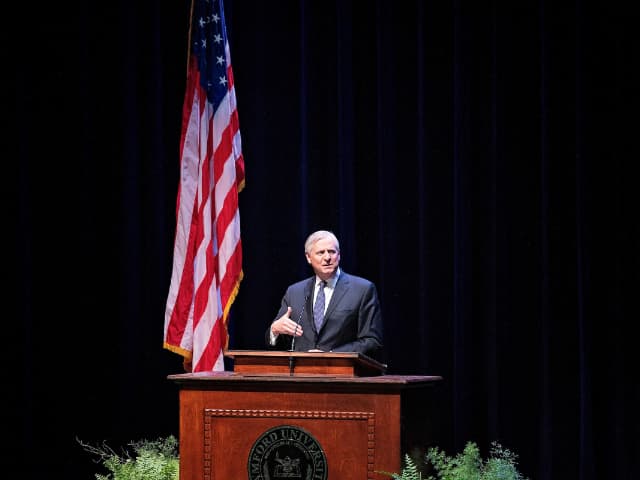 Engaging in respectful civil discourse and showing Christlike love and respect to everyone, but especially to those with whom one disagrees, was the focus of a five-day series called Love Thy Neighbor at Samford University. The campuswide event was intended to bring students, faculty and staff together to explore and reflect on how Christians can best engage with others with dignity and respect.

The topic of civil discourse was addressed through lectures and discussions featuring renowned guests, faculty and students. A panel of deans kicked off the week-long emphasis on Monday, March 21. The discussion, titled Community Conversation, was facilitated by Chad Carson, dean of Brock School of Business; Anna McEwan, dean of Orlean Beeson School of Education; and Melondie Carter, dean of Moffett & Sanders School of Nursing.

President Beck A. Taylor presented On Civil Discourse to students and staff during the weekly Campus Worship service on Tuesday, March 22. During his presentation, he spoke about the importance of learning about different experiences and beliefs, especially those that may differ from one’s own, not to necessarily change one’s convictions, but to learn more and reflect on what one believes and why.

“I want Samford to be a community that embraces conviction and curiosity. We want students at Samford to hold to their beliefs strongly. No one is asking you to let go of your convictions. At the same time, I want you to remain curious,” Taylor said. “I want you to seek out people with different ideas and convictions so you can put your beliefs to the test.”

He also called for the community to be known for its hospitality and humility, especially among those who have different beliefs.

“Let’s resolve as a community that we will welcome and serve those with whom we disagree. Let’s treat our guests with great respect and deference, welcoming them into our space and showing them the love within our community,” Taylor urged. “Let’s admit to ourselves and our guests that we may not know everything about a topic. Let us not assume that there’s nothing we can learn from those who may take a different side on an issue.”

Pulitzer Prize-winning author and historian Jon Meacham delivered an address Tuesday evening based on his New York Times best-selling book The Soul of America: The Battle for Our Better Angels. In his remarks, he spoke about four key principles to follow when trying to love one’s neighbor: curiosity, compassion, candor and empathy. Meacham provided examples of how past national leaders embodied these principles, citing examples of compassion from John Lewis during the Civil Rights Movement and the empathy President George H.W. Bush displayed to others throughout his life.

Meacham called on the audience to love one’s neighbor, especially those with whom one disagrees.

The week progressed with additional opportunities for the community to learn more about engaging in respectful civil discourse. A panel discussion, Living Christianity in a Polarized, “Us Against Them” World, featured Christian leaders who spoke about the challenges they have faced in their fields with those who disagree with them and how they have responded with love and grace. The panel included Rev. Cokiesha Bailey Robinson, associate dean of diversity and inclusion at Grace College in Winona Lake, Indiana; Rev. Scott Sauls, senior pastor of Christ Presbyterian Church in Nashville, Tennessee; and Rev. Thomas Wilder, pastor of Bethel Baptist Church of Collegeville in Birmingham, Alabama.

The three called for Christians to act with humility and grace, especially towards those we may disagree with.

“You have to be willing to love people and invite them in, not judge them and curse them,” Wilder said.

A student-led discussion featuring undergraduate students was held to serve as a model of civil discourse, where students represented and expressed different ideas on various topics. These included how to respectfully respond when confronted with an idea in the classroom one does not agree with; how to approach discussions about different beliefs with humility; and how to thoughtfully challenge differing ideas.

The Love Thy Neighbor series closed with another faculty panel that discussed civil discourse on campus. The panel featured Will Kynes, director of Preministerial Scholars; Jennifer West, director of Core Rhetoric and Seminar; Jonathan Den Hartog, chair of the Department of History; and Greg Laughlin, director of the Law Library.