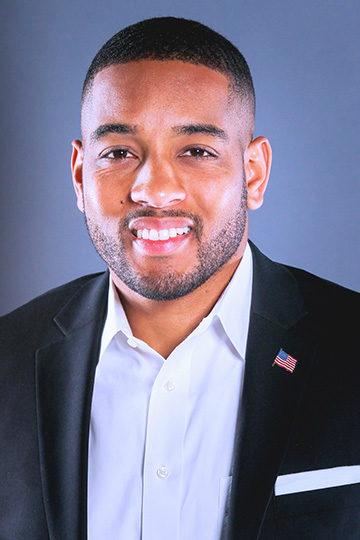 Bonus Fact:          Keith played on the Samford football team as an undergraduate.

What Samford faculty member had the most influence on you and why? A number of faculty put in a lot of unpaid overtime. [Kristie] Chandler and her staff saw something in me that I didn’t see in myself. Not only did they want to see me through graduation, but they also believed in the notion of learned experience, which helped me get jobs and internships off campus as well as start my nonprofit Brothers of One voice. The coaching staff and the administration played a very big role in helping me stay the course, even when it wasn’t in their job description to do so.

How did you become interested in local politics? I’ve always seen the importance of its impact. Though I’m not sure I’ve liked the politics part, I have understood that the beauty of democracy is found in municipal governance: no parties of which to attach yourself, and you get the opportunity to see immediate change to everyday issues. Everyone wants good schools, safe neighborhoods, great parks, clean streets, updated infrastructure and overall high quality of life. If you can get a few elected officials in one accord, you can get those things without the polarization of R or D next to their names. Most of the federal leaders today started in someone’s city hall or state house.

What is the best advice you were ever given and by whom? An older gentleman I met in Boston over a game of chess said, “A wise man learns from his mistakes. The wisest man learned from the mistakes of others . . . saw my brother touch a hot stove one day.”

Why did you choose Samford? It’s a long story, but in short, this is without a doubt where God knew I needed to be. I signed my scholarship to play football understanding I was not only going to play for a great coach [Pat Sullivan], but that I was going to have the best degree in the state of Alabama.

How did your Samford degree prepare you for what you are doing now? A lot of the socioeconomic policy we work on comes back to the family. Understanding the impact of public systems/policies on the families of our city as well as the potential repercussions of a decision allows you a much better perspective when thinking about legislation.

Why have you stayed involved with Samford? I truly wish I could do more. I look back on the blessing that school was and the headaches I caused, and thank God every day I was able to walk across that stage [at graduation]. I tell everyone I can, “if I can make it, you can definitely make it,” and to parents alike that “Samford University cared about a kid from Northwood’s housing projects as if my last name was Howard.” This school is an institute of learning and growing, not just for the students, but for the school as well. As this nation changes, it is faced with tough situations, and the administration has handled it very impressively.

What advice would you give to students interested in pursuing local politics as you have done? “Wing it to win it!” (I may need to copyright that for a future book deal!) But, you have to care now. The issues that we face in federal politics usually bubble up from some local movement. History shows us that local change has power to make national impact. If you truly care about moving the needle on an issue, more than likely, you can do so at a local city council meeting. If you can’t and it’s because the person who has the powers doesn’t want to, you can do like I did: round up your craziest friends, clean off your kitchen table, dump your piggy banks, take on a 28-year incumbent and four other candidates, knock on every door every day, listen 10 times more than you talk, dump more piggy banks, knock on more doors, believe in yourself and your team, and you’ll look up one day and be the youngest elected person ready to bring much needed change.