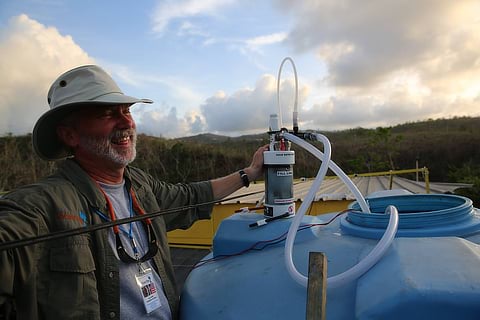 What Samford faculty member had the most influence on you and why? There were several. Dr. Jim Brown was a new history professor when I came as a freshman. It was probably a chemistry thing more than anything else. I just really liked him as a professor and later even more as a friend after I graduated.

Dr. Vernon Davidson was a sage of a religion professor and tossed out many gems in his classes, one which stuck with me was to “always keep an open mind.” Elizabeth Forman taught psychology and often talked about “peoples peculiar adjustment to life” and to not take life too seriously.

Why did you choose Samford? Growing up, I was always active in my hometown church. I always felt a calling to try and make a difference. It was easy at that age to think it is a “calling” into full-time church work. Following that “calling” I choose to attend Samford as a ministerial student. Later, a few years after Samford, I realized that a calling to make a difference can be lived out in so many different fields of work, including engineering which is where I ended up as a career.

How did you become involved with nonprofits? What does Hope Manifest do? For many years I did a little volunteer work with Habitat for Humanity. I took early retirement because I wanted to be more involved as a volunteer and was young enough to do so. The two cofounders of Hope Manifest were fellow church members and asked me to help them with some technical requests they were receiving from their clientele—nonprofits. As I worked with these nonprofits I saw the difference they were making in the world. I was hooked at that point and have been deeply involved with a number of nonprofits ever since. Hope Manifest helps nonprofits develop a sharper focus on how to best survive in the world of a million other nonprofits. They work with clients to create a viable business model, to develop an infrastructure of policies and procedures, to identify the correct board member types and most importantly to learn the correct way to raise money to support the nonprofit. Hope Manifest is a kind of mentor to nonprofits.

How did your Samford degree prepare you for what you are doing now? I feel a liberal arts degree prepares a person for life—to think, to feel, to relate to people. Being a religion/psychology major from Samford and also having an engineering degree I was a bit of an enigma. My educational background gave me the foundation to work with the those helped by nonprofits: to build houses, to install water purification systems in remote villages, to teach people how to repair hand pumps for water wells, to show people how to build septic systems for outhouses from used oil drums and to bring systems that provide disinfectant and safe water to disaster areas. While doing this work I find I am also relating to people on a personal level and building all important personal relationships.

Describe some of the work you did recently with hurricane relief. A nonprofit I work with has developed two systems, one to make contaminated water safe to drink and another to make bleach. Each system uses only table salt and a 12-volt power source to perform these lifesaving tasks. I was invited to go with a small group to Puerto Rico shortly after Hurricane Maria. We took 22 kits that contained a water purification system that is capable of providing more than 10,000 gallons of safe water per day, a bleach maker that will make five liters of medical grade bleach per hour, a solar panel that will run the two systems and a 500-gallon water tank. We taught over 100 people how to set up, operate and maintain these systems and then distributed the kits to the new trainees. We have sent down an additional 20 kits and will be sending down an additional 40 kits before the end of the year. This will put at least one kit in each province on the entire island of Puerto Rico.

How did you become involved with the woodworkers ministry to children’s hospitals? About the time I retired a friend and fellow coworker invited me to attend a meeting of the Alabama Woodworkers Guild. The guild promotes the art and craft of woodworking in Alabama. Shortly after that I joined the guild and also became a regular part of a subgroup within the guild called the Toy Group. We meet once a week at the guild’s workshop in Maylene, just a bit south of Birmingham. There we use the scraps we receive from Habitat for Humanity to make simple wooden toys to donate to different organizations. We started with donations to Children’s of Alabama. Then as the Toy Group got larger and more prolific we had more toys than Children’s could use. Next, we gave toys to Greater Birmingham Ministries, to a couple of Children’s hospitals in Atlanta, to Children’s in Nashville and Memphis and as far away as Arkansas.

What advice would you give to current students interested in pursuing faith-based not-for-profit careers? Prepare yourself the very best you can. Know that the attrition rate is very high for startup nonprofits, much like small business startups. Work hard to discover what your talents are. Identify what you are passionate about. Try your very best to situate yourself where your talents and passion intersect.