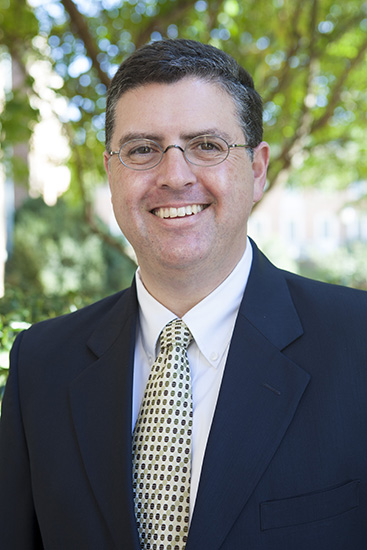 Teaching at Samford since 2004

Bonus fact: Wallace is one of the founders and coordinators for Samford’s Great Ideas Summer Institute.

Why do you teach? Why do you teach at Samford?  I teach because I enjoy the energy of the classroom and the student-professor dialectic. I also like to wrestle with complex ideas and historical events and to hopefully model value critical thought and clear expression for students. Being a professor means I actually get to "profess" something with my career. I teach history at Samford because, unlike many universities, Samford strikes a coherent balance between disciplinary training and a required introduction to the humanities for all of its students. This is a valuable, and in many places neglected, approach to higher education.

What is one thing you want your students to know when they graduate from Samford?  I want my students to know that being educated should mean you have the conceptual tools to discern better ideas and cultural expressions from worse ideas and cultural expressions. You can enter into the study of the liberal arts without becoming a moral relativist. Liberal learning is so much more than simply tolerance of differences or a prologue to a professional degree. It is cultivated discrimination in the best sense of the word and it makes a difference in how you order your life. It is "liberating," a kind of freedom that cannot be won apart from hard mental work.

What is your favorite non-Samford activity?  Smoking a pipe on the front porch with my Scottish terrier, Maxwell, and listening to my children laugh and play. Why? Because leisure is the basis of culture. As the philosopher Joseph Pieper reminds us, “Leisure is only possible when we are at one with ourselves. We tend to overwork as a means of self-escape, as a way of trying to justify our existence.”

How did your background prepare you for your current role at Samford?  I have an undergraduate degree in literature, a master’s in theology, and a Ph.D in European and American religious history. It took time but my training proved fortuitous. I have developed several intellectual history courses for the history department that are great fun to teach, and I direct the freshman Core Texts Program which introduces Samford students to humanities narrative from the ancient world to the 20th century.

Your research focuses on religion and politics, but in early centuries. What parallels do you see today with the confluence of those two topics?  I took courses and comprehensive exams on the early centuries but my research is more the modern period. The parallels between Rome in the 5th century A.D. and today are striking: a materially bloated and morally confused superpower; a voluntary and underpaid military; immigration transforming the political landscape; a discordant marketplace of religious beliefs and Gnostic spiritualisms; an unwieldy tax burden leveled against the middle class; sophistry run amok in education; a Christian church groping for coherency. In late antiquity St. Augustine produced the City of God in an effort to make sense of religion and politics. His work changed the course of the West. Today comprehensive historical-theological narratives belong to Islam.

Who is your favorite writer and why?  Impossible question!  Fiction: Fyodor Dostoevsky. He understood nihilism and the 20th century before the nihilists. History: R. G. Collingwood. He understood that history needs philosophy and philosophy needs history. Philosophy: Roger Scruton. He understands that humans share pre-political relationships before they share political relationships. Theology: Augustine. Cited by Aquinas, Luther, Calvin and Barth as an authority to be heeded.

What’s one thing that most students do not know about you?  I pole vaulted for one season in high school.

What was your inspiration for the Great Ideas Summer Institute and how has that evolved?   Several years ago I received a fellowship to work with the Lehrman Institute of American History and the James Madison Program at Princeton University. Here, prominent and established scholars from a variety of universities led a series of lectures and discussions on American intellectual history. Some the best discussions involved the relationship between the environments of the American colonial period and the early republic and the classical worlds of Greece and Rome. I thought such discussions might be a great way to introduce high school students to some of what we do and value at Samford and so I developed a curriculum. The University Fellows Program jumped on the proposal and have used it with success for recruiting. There are plans afloat to expand similar efforts into other areas of the university in the near future.