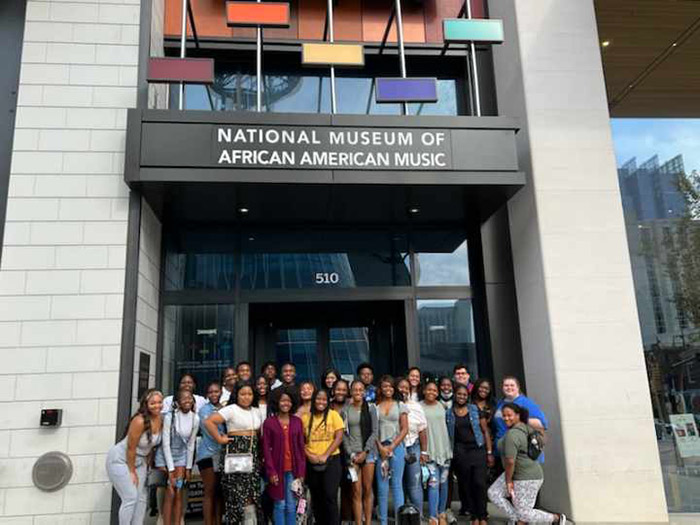 Co-curricular activities are important as they assist in rounding out the academic experience. With that in mind, Samford IMPACT (Inspiring Minorities to Pursue Academics and Community Together) students travelled to Nashville, Tennessee, for their Fall Retreat in October. As the first streaks of morning light began to change the color of the early morning sky, the students loaded the bus to travel to Nashville.

Students started the day by visiting the National Museum of African American Music. Located downtown, just off the famous lower Broadway Street, the museum tells of the deep and nuanced history of the unique African American experience and the role music had played in shaping not just Black culture, but American culture as well. From gospel to rock, jazz to hip hop, and funk to pop, students had the opportunity to explore the way that Black Americans used music to celebrate, communicate, and advocate over the years and from various genres. Students explored the ways various artists were influenced by the church, politics, and even each other. They were even able to create a playlist comprised of the highlighted musicians and record a video singing with a virtual gospel choir!

After a delicious lunch at the local, BIPOC-owned Slim n Huskys, students then traveled to the Frist Museum of Art. There, IMPACT participants explored the deeply personal works of artist Karen Walker. After some reflection and discussion, students tapped into their own creativity by participating in hands-on art projects, even creating prints that they could leave with.

The goal of this initiative was to allow students to see themselves in the world around them while experiencing cultural and ethnic engagement and deepening connections among IMPACT students. According to the students below, the event was a success!

“The Nashville excursion was a fantastic way for me to congregate with my peers and learn more about multicultural creative history!”Alexis Oliver, Nursing

“The IMPACT family trip to Nashville was a great experience, not just because we were able to learn about the musical history of our culture as well as of impactful, raw, Black artistry, but rather because we learned it as a community. Going on this trip together was enlightening in that we were able to connect a little more deeply with one another- a step forward in the direction of feeling included on Samford’s campus.”Elijah Carswell, Pre-Pharmacy

“This experience allowed me to get connect with more IMPACT members and learn through exploration.”Meera Patel, Education