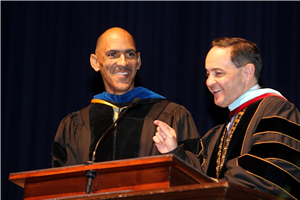 “Everyone leads in some way,” said Dungy, urging students to always lead in the proper way. “Don’t think you aren’t a leader. You never know who’s following you.”

In 2007, Dungy led his Colts to a Super Bowl win over the Chicago Bears, making him the first African-American head coach to claim that championship title. Since retiring after the 2008-09 season, he has been an analyst on NBC’s Sunday night studio show and is a national spokesman for the fatherhood program All Pro Dad.

Introduced as a surprise guest during the first convocation of the fall semester, Dungy responded to informal interview questions posed by Samford president Andrew Westmoreland.

He said that a number of people in his life taught him trademarks of character.

“With one minute left in the Super Bowl, I thought about how my parents gave me a Christian foundation and the confidence to think outside the box,” said Dungy. Teachers and coaches talked about developing as an athlete and also as a person. And there were teammates and pastors who, by one thing they said, could send a life in a different direction.

“One sentence might turn a person’s life,” said Dungy, who has written several books. His most recent, The Mentor Leader, debuted earlier this month.
About success, Dungy recalled wisdom he learned as a player and assistant to Super Bowl winning Pittsburgh Steelers coach Chuck Noll, whose advice was to never make a career decision based on money. Rather, consider the relationships involved, and how they could help you be a better person.

Later, when he was coaching his own Super Bowl game, Dungy told his team that by winning they would be the “heroes of the world for a year.”

“But real success is how you use your talents for the Lord,” he said he told them.

Character and integrity are two different things, said Dungy, citing his dad’s belief that it’s not what you do in life, but how you do it.

“Character is the total spectrum of what you are. Integrity is how you handle specific things,” said Dungy, who told how he resisted buying pre-done course notes while a student at University of Minnesota, where he was a much-heralded quarterback in the 1970s. “Integrity is not taking the short cut, but knowing that the right thing is the best thing.”

Since retiring from professional football, Dungy stays busy with broadcasting, faith-based public speaking, and “always trying to determine where God wants me.” A twice-monthly phone Bible class with other coaches helps. “Those calls help me stay focused and still stay in touch with the Lord in the midst of a heavy schedule,” he said.

In reference to the Samford Bulldogs season opener football on Saturday against Florida State, Dungy diplomatically shunned picking the team from the state where he once coached the Tampa Bay Buccaneers and now calls home. “I’m picking Samford,” he said to thunderous applause.

Special guests at the convocation were members of the Founders Circle, donors who have supported the university with annual financial commitments for at least 35 years. “These are men and women whose combined gifts over the years constitute more than $17 million,” noted Dr. Westmoreland. “We thank them for all they have done to make a Samford education experience possible.”