'40 Years After Tolkien' On Display at Samford Library 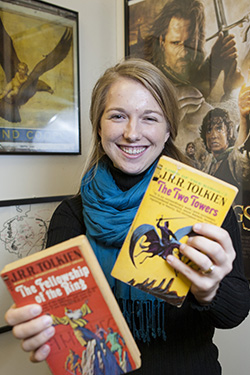 An exhibit celebrating the fantasy world of Middle Earth as created by J.R.R. Tolkien is on display at the Samford University Library. The fascinating and vast collection includes first editions in hardback and paperback, movie posters and other documentation related to Tolkien and his Ring series.

The display acknowledges the 40th anniversary year of the death of Tolkien and is timed in anticipation of the opening of the movie, The Hobbit: An Unexpected Journey on December 14, according to Samford user engagement librarian Marliese Thomas. The Samford exhibit will be up through Jan. 2, 2013.

The items on display, more than 50 in all, are courtesy of Samford graduate student Rebecca Poe Hays and her father, Union University professor of theology and Christian apologetics Dr. Hal Poe. The two have studied and written extensively on Tolkien, C.S. Lewis and other literary-minded Inklings from Tolkien's Oxford University tenure in the 1930s and 1940s.

Hays, a student at Samford's Beeson Divinity School, is especially fond of two items in the exhibit. "The History of Middle Earth series, edited by Christopher Tolkien (J.R.R.'s son), is important for understanding that Tolkien did not just write four novels. He created an entire world with its own history, mythology, ethnicities and languages," said Hays, who spent an undergraduate term at Oxford University, where she attended meetings of the Tolkien Society.

She also appreciates the exhibit's paperback editions. One set, a pirated edition released without Tolkien's permission, ultimately prompted the writer to agree to the release of an "authorized" paperback edition, revised and complete with a special author's note.

Hays, a Tolkien fan since childhood, has been collecting Tolkien memorabilia since her father began giving her first and rare editions for birthdays and Christmas when she was in high school.

Her father, she explains, has long been interested in the ways the church can share the gospel message with the larger culture, which Lewis did in his Chronicles of Narnia series.  "Tolkien did this in a much more latent way with the values and themes that run throughout The Lord of the Rings," said Hays, whose bachelor's degree is in English literature. "This intersection of faith and literature is also of great interest to me."

The exhibit also includes a photo slideshow, courtesy of Allen and Susan Hammack of Tolkien fan site TheOneRing.net., who visited "The Shire," just prior to the filming of The Hobbit, at the Matamata, New Zealand, location in 2011. The film's cast includes Martin Freeman as Bilbo Baggins, Elijah Wood as Frodo, Cate Blanchett as Galadriel and Ian McKellen as Gandalf.

Tolkien began his Middle Earth writings with The Silmarillion during World War I, although it was not finished nor published until after his death.  His more famous The Hobbit was published in 1937.  A sequel, The Lord of the Rings, was finished in 1949 and published in 1954-55 in three separate volumes:  The Fellowship of the Ring, The Two Towers  and Return of the King.

The Samford exhibit includes hardback copies of the first American edition of the three volumes of Lord of the Rings.

The exhibit gained favorable attention almost immediately after being situated on either side of the grand staircase in the library. "I've already seen lots of students stop and smile when they see it," Thomas said the day after it was placed.