Published on November 9, 2012 by William Nunnelley   Share this on: 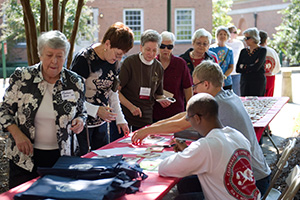 The anniversary year began with a sky full of balloons and concluded with an evening overlooking Birmingham.  Samford University's Ida V. Moffett School of Nursing wrapped up its 90th anniversary observance during homecoming weekend, celebrating the school's rich history and numerous alumni.

The celebration kicked off Jan. 23 in the Dwight and Lucille Beeson Center of Healing Arts plaza with students, faculty and staff members in attendance. With birthday cake and a balloon release, the day marked the official anniversary of the opening in 1922 of the Birmingham Baptist Association School of Nursing, later renamed the Ida V. Moffett School of Nursing.

The 90th anniversary presented a unique opportunity for the school to bridge the gap between alumni from various decades and programs.  Throughout the year alumni groups worked with the school to plan special reunions for the anniversary weekend.

"We were pleased to welcome alumni from classes as far back as 1948 and as recent as 2012," said nursing Dean Nena Sanders.  "It was a blessing to see Moffett nurses united for this special occasion.  Mrs. Moffett would be very proud."

According to Dean Sanders, current nursing students also embraced the anniversary and attended the various events.

The homecoming anniversary weekend began with the Cap and Cape Society lunch Friday, Oct. 12, in the Pete Hanna Center.  The lunch honored the history and traditions of the Birmingham Baptist Hospital School of Nursing.  The school was later renamed and eventually relocated to Samford University in 1973.  More than 100 alumni participated in the inaugural gathering of the group; guests enjoyed food and fellowship, and the event concluded with alumni sharing their favorite memories from their years as nursing students.

Appropriately, the celebration concluded on Saturday evening with the Living Legacy Gala at The Club in Homewood, Ala. With more than 425 guests in attendance, the event honored 50 alumni for their significant impact on the mental, physical and spiritual well-being of others.  Honorees included alumni from the classes of 1948-to-2012 who have perpetuated Mrs. Moffett's vision for academic excellence, caring compassion and service.

"As I reflect on the 90th anniversary events, I believe that we accomplished what I hoped we would," said Sanders.  "We not only reconnected with numerous alumni, but we also showed that although the school has evolved throughout the decades to meet the changing demands of healthcare, Mrs. Moffett's legacy for nursing excellence and compassionate care is still very much alive in our students, alumni and programs."

The anniversary year was appropriately themed, "Celebrate the Living Legacy: 90 Years of Caring."

With the anniversary celebrations complete, the school's focus now turns to maintaining and growing relationships with alumni who reconnected during the special year.  According to Katie Stripling, the school's director of advancement and alumni affairs, the school will continue to offer a variety of opportunities for alumni to remain engaged.  "The Moffett Nurse Network, an alumni program designed to take alumni events to cities where Moffett nurses live and practice, will be back on the road in the spring of 2013," said Stripling.  "Alumni are essential to our continued success, and we embrace every opportunity to connect with them."

Alumni interested in hosting a Moffett Nurse Network event in their city should call 205 726-2265 or email kstripli@samford.edu.

This story includes reporting by Katie Stripling, director of advancement and alumni, Ida V. Moffett School of Nursing, and Sarah Waller, a journalism and mass communication major who is a writer in Samford's Office of Marketing and Communication.