Published on December 15, 2012 by William Nunnelley   Share this on: 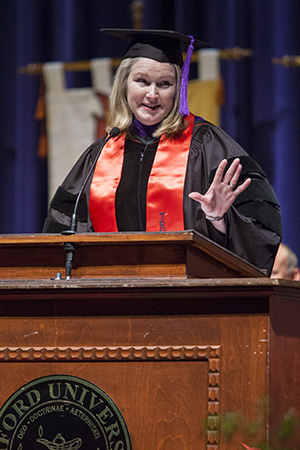 Federal District Judge Karon O. Bowdre told Samford University seniors that "a great journey lies ahead, full of adventure, full of unknown joys and sorrows, but what a ride awaits you!"   She asked them to "embrace the ride, enjoy the journey . . . and cherish every moment."

Judge Bowdre, a two-time Samford graduate, addressed an audience of about 2,000 in Wright Center at Samford as the University awarded degrees to 269 Fall graduates.  Bowdre earned her undergraduate degree in 1977 and law degree from Cumberland School of Law in 1981.

Bowdre shared her 1975 undergraduate experience as part of a Jan Term class that renovated a small store front to serve as an outreach center in lower Manhattan, New York City.  "I had never seen such a place, a true ghetto with dilapidated buildings, populated it seemed by drug addicts and dealers, street walkers and assorted characters," she said.  "My eyes were opened wide to a different world with different needs and different problems."

After a two-week orientation at Samford, the group of 19 students headed to Manhattan's lower east side with campus minister Esther Burroughs and religion professor W. T. Edwards.

"We worked hard that week despite the cold," she said, tearing out old sheet rock and joists, replacing them and cleaning and rewiring the store front as the community's inhabitants watched.  They painted the word Graffiti on the wall and named the place Graffiti Center.  "We returned to Samford deeply changed by what we had seen," she said.

"I know that many of you have had similar experiences while at Samford," she said, maybe helping someone learn English or helping build Habitat homes or reaching out to help tornado victims.  "Know that those experiences will reap benefits," she told the graduates.

In closing, Bowdre asked everyone but the graduates to stand.  "These are the people who are largely responsible for your being who you are and where you are today," she told the seniors.  "You truly are encircled by a very great cloud of witnesses."  She challenged them to run the race of life with perseverance and to make those that had supported them "proud of you."