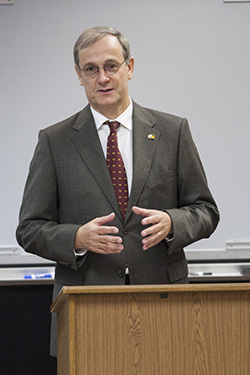 Germany and the United States have much in common and can learn from each other with more involvement in business and education endeavors, according to Christoph Sander, the new Consul General of Germany to the southeast region of the United States.

Speaking to a group of local business executives, Samford faculty and students Nov. 6, Sander noted that the U.S. and the European Union are the two strongest economies in the world and that Germany is the most populous country in the European Union.  Unfortunately, he commented, since the end of World War II America's presence in the country has not been strong and too often Germany is viewed, at least politically, as being socialist.

Sander noted, however, that Germany had invested considerably in the U.S., and particularly in the Southeast region.  The Mercedes Auto Manufacturing Company in Vance, Ala., and the ThyssenKrupp Steel plant north of Mobile, Ala., are two examples. Other smaller plants exist as well.

"Likewise, it is important that U.S. companies invest in Germany," said Sander, noting that Germany had been an ally of the U.S. in the political crisis that has engulfed the Middle East.

Sander suggested that both nations could learn from each other. He explained that Germany had education and apprentice programs that produce a strong, highly-paid, skilled labor market, while the U.S. is a leader in marketing techniques. "I think we could learn from each other in both areas," he said. He suggested that this would allow the U.S. to move away from the cheap labor market abroad by producing more higher-skilled workers here at home.

Sander praised the student exchange program as a way to create a stronger understanding of each other and their cultures.

Angela Ferguson, who teaches German in Samford's World Languages and Cultures Department and also heads the Office of International Initiatives, said she, too, would like to promote more exchange programs with Germany but in all subjects, not just language.

Samford has a summer study abroad program with Sprachinstitut Treffpunkt, a private institute that teaches German to non-native speakers. It is a five or 10-week program in which students reside with host families. Samford also has an exchange agreement with Padagogishe Hochschule Weingarten, a University of Education that sends two students to Samford each fall. Samford sends one student to Weingarten each spring.

Sander's visit was arranged by Michael Johnson, the Honorary Consul of the Federal Republic of Germany for Alabama. He is a 1987 alumnus of Samford.  Ferguson said she was "most appreciative" of Johnson's effort as he not only brought the new Consul General to Alabama but to Samford University.