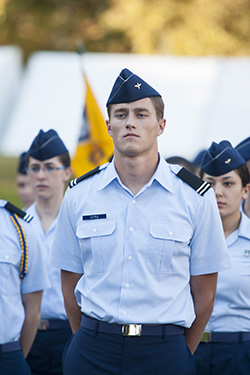 Samford University's Air Force ROTC Detachment 012 received the Most Outstanding Unit Award from the Air Force Association, recognizing it as the best detachment in the state of Alabama.

The detachment received the Most Outstanding Unit Award at a Nov. 7 ceremony at Maxwell Air Force Base. Along with the award, the detachment was given a small cash donation for its booster club, as well as the honor of providing a home for a traveling trophy for the next year.

Outranking larger detachments at schools like University of Alabama and Auburn University, the award recognizes Detachment 012 for its excellence in training, commitment to service and relationship with Samford. The detachment's mission is to produce Second Lieutenants for the United States Air Force.

"We knew the detachment was the best; we were just waiting for confirmation," Samford President Andrew Westmoreland said in a congratulatory email to the detachment.

Over the past year, the detachment has undergone a complete reorganization of its training program, according to Col. Brian Landry, detachment commander. With a stronger focus on developing leaders of character, the new structure allows the older cadets to practice leading the younger cadets through a multitude of training and service projects.

And, the new training structure paid off because the detachment earned a 100 percent pass rate at last spring's physical fitness assessment, a difficult task for an entire detachment to achieve.

Jenny McBride, a senior cadet, said she has always felt supported by Samford in her decision to join Air Force ROTC, but she saw the visualization of it at May's commencement ceremony.

Four cadets were commissioned into the Air Force a day before the ceremony. As the four students walked the stage to receive their diploma, they were asked to remove their graduation gowns to reveal their service uniforms underneath.

"They all received standing ovations, which was really cool," McBride said. "It was such a great way to recognize the military, and I really appreciated it."

Weeks prior to receiving the award, the detachment welcomed Col, Bill DeMarco, the Southeast Regional Commander of Air Force ROTC, to campus. He visited with cadets and attended their lead lab, a ROTC leadership course.

Sarah Waller is a journalism and mass communication major and a writer in the Office of Marketing and Communication.