Be Secure as Child of God, Says Fowler Lecturer 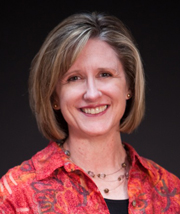 That way, "no one person's flattery will puff you up, and no one's criticism will pull you down," she said, noting the value of having friends who can speak the truth.

"Through them, God keeps calling to you to remember who you are-God's own child forever, flawed and forgiven, sick and being healed, and held in a love that will never, ever let you go," she said.

She based her remarks on the passage from Acts that recounts Paul and Barnabas' episode in Lystra, where during their brief visit a lame man responds to Paul's command to walk. While the mostly pagan, superstitious townspeople hail the two visitors as gods in disguise, enemies soon stir up the same crowd and end up stoning Paul to near death.

"In one moment they're worshipped, and in the next, they're walloped," said Pennington-Russell. "The thing I love about these two is how undistracted they are by either kind of response. When they get praised, they deflect it, actually they re-direct it toward God, and when they get beat up, they shake it off and get on with their mission."

And why?  Because they're secure in their identity as God's children, and absolutely committed to their mission under God, she said.  "They know who they are, and they know what they're about, and that made all the difference for them."

Having that knowledge is especially crucial for leaders in ministry, she said. "There will always be someone who wants to put you up on a pedestal, and someone else who'd want to drag us out of town.  If you're not careful, you can spend your whole life being the victim of somebody's opinion about you."

She also cautioned against "up and down" opinions of oneself.

"If you don't really know who you are, then you're always vulnerable to that same, crazy cycle of self adoration followed by self loathing," she said.

But the Good News, she said, is that the spirit of Christ invites a freedom from the tyranny of other people's opinions, as well as the tyranny of our own opinion of ourselves.

Pennington-Russell recalled receiving two very different messages in one day last summer. An affirming email gave her credit for everything that was going right at First Baptist Church, which she has served as lead pastor since 2007.

Hours later, the writer of an anonymous, hand-written note wondered why the search committee had decided to "inflict" Pennington-Russell upon the congregation in the first place.

Both notes were dangerous for different reasons, observed the former pastor of Baptist churches in Waco, Texas, and San Francisco, Calif. One message can lead to despair, but the other, "the far more dangerous of the two," can lead to pride. "And both are a lie."

"Only God tells you the whole truth about yourself-that you're a wonderful mix of both the fabulous and the fallen.  And God, with a 'never-give-up-on you-no-matter-what' kind of love, keeps calling to you to remember who you are."

Pennington-Russell holds a bachelor's degree from the University of Central Florida in Orlando and a master of divinity from Golden Gate Baptist Theological Seminary in Mill Valley, Calif. She is pursuing a doctor of ministry degree at Baylor University's George W. Truett Baptist Theological Seminary.  She and her husband, Tim, have two teenage children, Taylor and Lucy.

The Fowler lecture honors the late Samford graduate and longtime Hartselle, Ala., resident who was one of the first female pharmacists and pharmacy owners in Alabama. The annual lectureship is coordinated by CWLC director and associate professor Dr. Delane Tew.