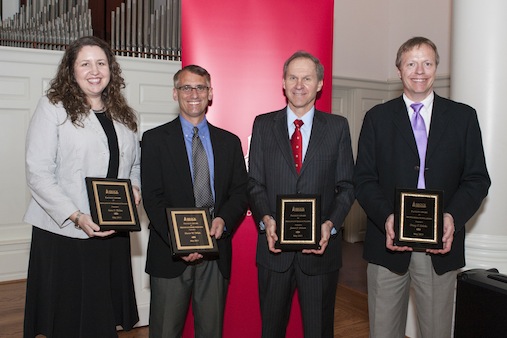 Samford’s Brock School of Business recently announced that Vicki Briggs, Executive Vice President and COO at St. Vincent’s Health System has been named alumnus of the year.  Briggs is a 2009 MBA graduate and member of the Brock School of Business Advisory Board.  She recently returned to Birmingham from Lafayette, La., where she was the CEO of The Regional Health System of Acadiana.  Briggs, an American College of Healthcare Executives Fellow (FACHE), has more than three decades in leadership roles in healthcare.   She also has been active in community organizations including: the United Way, American Heart Association, March of Dimes and the Rotary Club in Birmingham, Ala.

“Vicki has an impressive history of executive leadership in the healthcare industry,” said Howard Finch, dean of the Brock School of Business.  “She has made tremendous contributions and innovations to the quality of healthcare in our community through her work at St. Vincent’s”

In addition to naming the alumnus of the year, the Brock School of Business also recently awarded the following faculty awards:

In other faculty news, Stephen Jones has been named the John W. Gay Professor of Banking, Barbara Cartledge has been promoted to Assistant Dean of Academic Programs and Sara Helms has been appointed the Director of the Brock Scholars Program.

“We are continuing our pledge to our students and university to ensure we have world-class faculty teaching a world-class curriculum to our business students,” said Howard Finch. “We are very proud of each and every one of our faculty members and they are very deserving of these honors.”

About the Brock School of Business : Samford University’s Brock School of Business has a long history of achievements in business education. The university has offered degrees in business and commerce since 1922 and was named in 2007 for Birmingham banker and Samford trustee Harry B. Brock Jr., reflecting his long career in business and his commitment to the highest quality business education program Samford can provide. In 1965, the School of Business was established to offer both bachelor’s and master’s degrees in business.  Alabama’s first part-time master of business administration degree program was established at Samford, and the first MBA degrees were awarded in 1967.  The master of accountancy degree was approved in 1995.  The business school was fully accredited by AACSB International in 1999, a recognition earned by less than 10 percent of business schools worldwide. The Brock School entrepreneurship program was chosen as the best new entrepreneurship in the U.S. in 2010 by the U.S. Association of Small Business and Entrepreneurship.