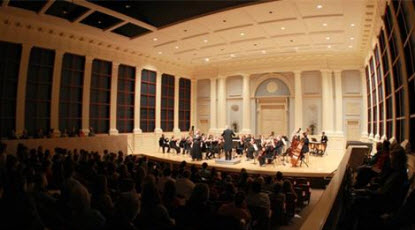 Brock Recital Hall at Samford University has received the prestigious Shutze Award for excellence in classical design presented by the Institute of Classical Architecture & Art (ICAA). Neil Davis of Birmingham-based Davis Architects, who was principal designer of the project, accepted the award at ICAA’s 7th Annual Awards dinner in Atlanta on February 23rd.

Evidence of such classical inspiration is found everywhere one turns at Brock Recital Hall, from the bowed exterior façade with Palladian windows, to the cherry-paneled lobby patterned after an English long gallery, to the intimate 333-seat interior conceived as a Doric temple turned inside out. The design of the interior performance space draws inspiration from the Odeon of Agrippa, an ancient concert hall.

“Jane Hollock Brock Recital Hall is a jewel – one of the most beautiful and popular performance venues on the Samford campus, and one of the finest in the Southeast,” said Joseph Hopkins, Dean of Samford’s School of the Arts. “Audience members are not only stunned by the remarkable classical design that they see when they walk into the hall,” he said, “they are delighted by the exceptional performance that they hear, thanks to sophisticated acoustical details designed by the architects.”

“For example, Davis Architects’ design enables us to ‘tune the hall’ differently for a solo performer, an intimate chamber music group or a big jazz band – to produce the very best sound possible for each type of performance,” Dr. Hopkins explained. “It is an exquisite space in which to present exceptional arts.”

“We are not surprised by the accolades that Neil Davis and his firm continue to receive today, as they help us stay true to the original Georgian style inspired by classical antiquity. We also appreciate their ability to produce buildings that are thoroughly modern in every technical sense,” the Samford president added.

“We congratulate Davis Architects on the well-deserved Shutze Award,” Dr. Westmoreland said, “and we thank them for the wonderful relationship that Samford has enjoyed with the firm for the past six decades.”

Coordinated by ICAA’s Southeast Chapter, the 2013 Shutze Awards design competition attracted more than 50 submissions from 35 different organizations, individuals and firms across the Southeast. Only 10 awards were presented, including the recognition to Davis Architects for classical design excellence in the commercial/civic/institutional category.