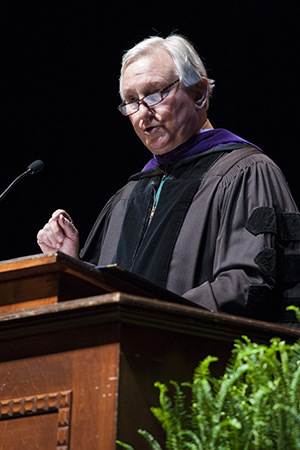 Chief Judge Joel F. Dubina of the U.S. 11th Circuit Court of Appeals urged graduates of Samford University's Cumberland School of Law to "avoid scheduling your life away."  Speaking at the law school commencement Friday, May 17, he said that was the most important advice he would share with them.

"You make this journey through life only once, and some things can be done only during a certain part of your life," he said.  "You can't tell an eighteen-year old that at long last, you have time and are ready to play with him or her.  The time to help a friend in trouble is now," not in two weeks or two years.

The law is a demanding profession, he said, and professors call it a jealous mistress.  "But I say to you: It doesn't have to be that way!"  He urged the law graduates "to live every day to its fullest and learn to live a balanced life."

Judge Dubina, a 1973 Cumberland graduate, spoke to a class of 149 and an audience of about 1,800 in Samford's Wright Center.  Law graduate Blake Hungerford of Kennesaw, Ga., won the Daniel Austin Brewer Professionalism Award presented annually at Commencement.  The award is named in honor of the father of retired Cumberland professor and former Alabama governor Albert Brewer.

"The greatest lawyers and judges in this country have been those who saw their work as an esteemed profession bound by an oath about justice, and not as a market-driven search for profit at any cost," said Dubina.

He said, "in his view," bar associations and courts "must demand that lawyers give something back to our great profession."  He challenged the graduates to accept court appointments without complaint and to get involved in pro bono projects to help the poor and indigent.

The judge told the graduates they must work to uphold the confidence of the public in our legal system.  "Our profession demands that you preserve the confidence in our system by being an effective advocate for your client and by acting with integrity in all aspects of your life," he said.

Dubina said "the cry for justice is universal," and that people all over the world "would give all they possess to live under a justice system like ours."  He challenged the graduates to "uphold our legal foundations and support our system in its pursuit of truth, justice, and equality."

The judge told the graduates that he went to law school at the insistence of his father, who told him that the professors would "teach you how to think."  He assured them that "having a law degree will greatly benefit you" because it is "the most versatile degree one can obtain."