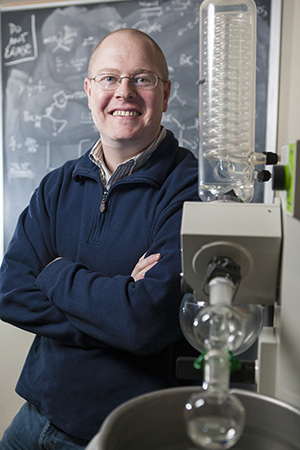 Note:  The following is part of an occasional series highlighting projects supported by faculty development grants funded through the Office of the Provost.

The problem:  Thousands of naturally-occurring compounds show promise in the laboratory against a myriad of serious diseases, but most have physiochemical properties that make them unusable as healing drugs. As a result, illnesses ranging from malignant cancers, AIDS and malaria to central nervous systems (CNS) disorders such as Alzheimer's disease continue to cause much human suffering.

Researchers at Samford University, however, recently tackled a design, synthesis and biological evaluation process to help discover families of "druggable" molecules that can be used to treat currently incurable CNS disorders.

Led by principal investigator Dr. Andrew J. Lampkins, the faculty-student team focused its research on ß-secretase, an enzyme associated with Alzheimer's disease, and for which no sufficiently druggable inhibitors are known.

The project was supported primarily by funds from a highly competitive Cottrell College Science Award with additional monies from a Samford Faculty Development Grant, the Arts and Sciences Program for Independent Research, McWhorter School of Pharmacy and Alabama Power Foundation.

The faculty development grant, said Lampkins, allowed the researchers to pursue a related spin-off project that broadened the scope of research from solely drug discovery to complex molecule synthesis and methodology development.

"From a synthetic point of view, we have accomplished our proposed goals, and more," Lampkins noted in the research report he prepared for the Cottrell award committee. "This has proven to be an extremely fertile area for us, as well a path into exciting new chemistry."

The findings have appeared in two peer-reviewed journal publications and have resulted in scholarly acclaim for Lampkins and many of the 18 student researchers, most of whom have now graduated.

Students Anna C. Worth and C. Scott Buess received first place awards in back-to-back years (2010 and 2011) in the undergraduate chemistry division at the annual meeting of the Alabama Academy of Science. Anna McKoy and Jake Mullins presented their work at the 2011 southeastern regional meeting of the American Chemical Society in Richmond, Va., and Buess and Richard Wakefield presented at the group's 2010 regional meeting in New Orleans, La.

Beyond the awards, Lampkins believes the students benefit in other ways.  "The most direct way is improvement in their knowledge and confidence for subsequent coursework they will undertake in the future," said Lampkins, who holds joint faculty appointments in the Howard College of Arts and Sciences chemistry and biochemistry department and McWhorter School of Pharmacy.

"However, my hope is that this research experience sparks an interest and passion for science, and serves as that pivotal moment in their education where they begin to actively 'experience' science rather than just passively learn about it."

Buess, a biochemistry major who graduated in 2012, echoes his mentor's thoughts. The research skills he gained from his 10 weeks in the organic chemistry lab during the summer of 2010 proved a notable benefit, he says.

"But, the most valuable aspect I gained was connecting my classroom experience to a realistic and progressive application of science," said Buess, adding that the new perspective helped him more efficiently learn material in his other science classes. He now looks forward to taking that ability to the University of Kansas School of Medicine, where he will enroll next fall.

Of the other student researchers, seven are now enrolled in medical school and three in pharmacy school.  Others are pursuing graduate degrees in chemistry, biology, biomedical research or physical therapy.

Lampkins notes that the focus on helping develop a possible treatment for Alzheimer's leant a human element to the painstaking work undertaken in the Samford labs.

"Sadly, nearly everyone these days has a friend or family member that is or has been touched by this disease," said Lampkins.  "That is certainly true of my student researchers, and also myself."