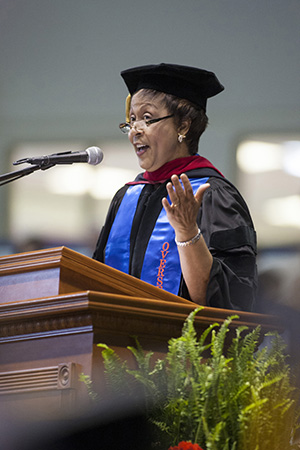 Have faith in God, in yourself and in others, Sixteenth Street Foundation president Rev. Carolyn Maull McKinstry advised Samford University graduates Saturday, May 18.

In life, as at Samford, there will always be encouragers around to give you a "big push" to fly. And following these faith directives, she said, "Will not only enable you to fly after you have been pushed, but will enable you to soar with wings of eagles-high, high into the sky."

McKinstry  spoke to an audience of more than 5,000 in Samford's Pete Hanna Center. Graduates from Samford's largest school, the Howard College of Arts and Sciences, as well as seniors from the School of the Arts and Orlean Bullard Beeson School of Education and Professional Studies--about 468 in all-- received diplomas.

A Birmingham native, McKinstry is a lifelong member of the city's Sixteenth Street Baptist Church and was present in 1963 when members of the Ku Klux Klan bombed the church.  Today, she is known worldwide as an itinerant messenger of the Gospel, engaging in a ministry of reconciliation and forgiveness.  She holds a Master of Divinity degree from Samford's Beeson Divinity School, and is a member of the university's Board of Overseers.

During the commencement program, Samford president Dr. Andrew Westmoreland presented McKinstry with an honorary Doctor of Divinity degree in recognition of a life "given to hope, not anger; reconciliation, not destruction; the path of God, not the path of despair; love, not hate; humility, not arrogance."

In her remarks, McKinstry noted that 50 years ago, a gathering such as the day's commencement would have not been possible in Birmingham, where all schools were "void of the diversity that we see today." The city, however, has undergone extensive transformation, she said.

"Not just in ways we can see, but in ways not visible to the eye. All of Birmingham should be proud as we reflect on the lessons of the last 50 years," she said. "We still stand tall as a beacon of hope and as a city whose redemptive power and influence continues to be felt around the state, nation and the world."

McKinstry underscored the importance of faith in the lives of the new graduates.

The prophet Jeremiah reminds us that God has a plan for our lives, she said, and God will cause all things to work together for our good. "Many things are impossible with man, but all things are possible with God to them that believe."

She  encouraged the graduates to believe in themselves.  "Faith in yourself is important-especially when no one else shares your vision and dreams," she said, citing a quotation by Maryanne Williamson that states: When we let our own light shine, we unconsciously give other people permission to do the same.

And, have faith in others, she advised. "None of us can exist in the world alone. Our interrelatedness means that whether we rise or fall, we do so together. When we look for the best in others, that is what we get.  When we give our best, we receive the best in return."

Despite current technological and communications advances, McKinstry said she feels the nation is losing a sense of community and connectedness. "If civilization is to survive, we must re-teach the 'neighbor theology,' and cultivate the science of human relationships-the ability of all peoples, of all kinds, to live together, in the same world of peace."

She urged the Class of 2013 to not be satisfied to imitate or follow the beaten path. "We still need leaders who will serve as agents of hope and transformational change, and ambassadors of reconciliation.  We still need all of Abraham's children to have a seat at the table," she said.

"Class of 2013, you are being called to do greater works than any that we have previously seen.  You are being called to insure that as a result of your tenure at Samford, the world will be a better place.  You can do this, and more.  For with God all things are possible to them that believe."

Senior Class president Rebecca C. Price, reminding her classmates that commencement marks a new beginning, recalled her high school graduation and the fears associated with the new beginning that was college.  "But remember how well our last new beginning turned out.  Let's make this new beginning even better than the last beginning," said Price. 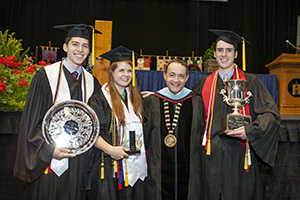 Westmoreland recognized Birmingham business leader, philanthropist and community leader Dr. Shelley Stewart as an alumnus honoris causa, making him an honorary member of the Class of 2013.  Westmoreland cited Stewart, president and chief executive officer of o2 Ideas corporate communications firm, for his "service to community and country and commitment to the cause of education." Stewart is also founder and president of The Mattie C. Stewart Foundation, which promotes education and other causes.

Westmoreland  also recognized the family of Samford student Caroline Neisler, who died earlier in the week.  Her sister, Elizabeth Neisler, received a bachelor's degree during the commencement program.

Saturday's graduates also included Jennifer Ellen McBride, who on Friday was commissioned a second lieutenant in the U.S. Air Force.

Samford provost Dr. Brad Creed recognized seven faculty members who are retiring this year: Chris Gillespie from the School of Education and Professional Studies, Ken Brazil from the School of the Arts, Cumberland School of Law professor Jack Nelson, and Dr. Myralyn Allgood, Dr. Jon Clemmensen, Charlotte Coleman and Dr. Penny Marler, all of the Howard College of Arts and Sciences.

Graduation exercises for Samford's Brock School of Business, Cumberland School of Law, Ida V. Moffett School of Nursing and McWhorter School of Pharmacy were held on Friday, May 17.  Graduates of Beeson Divinity School received diplomas in a graduation and consecration service on May 8.