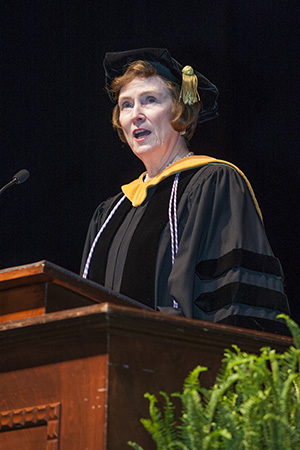 "Both of these women had been far ahead of their times and far outstripped what society wanted and expected of women in their generations," said Flowers, retired nurse educator, administrator and a pioneer in the nurse practitioner movement.

One of the first two nurse practitioners in the state and at times a bedside and public health nurse, sex educator and counselor, Flowers served the University of Alabama at Birmingham School of Nursing as a faculty member and assistant to the dean for alumni and faculty affairs.

During their careers, Flowers said, Nightingale and Moffett each became a force to be reckoned with.

Nightingale made a lasting change in healthcare by convincing male leaders and decision makers that her ideas, such as the need to look at the patient as a whole, not just the disease, were sound.

"She advocated clean patient, clean space and clean air, while allowing the body to heal as much as it could," Flowers said of the 19th century health care reformer who established the first professional nursing school in England.

Moffett, longtime director at the Birmingham Baptist Hospital School of Nursing, expanded on that notion by adding that compassionate words and touch enable one to see the patient as a whole, not just a disease, said Flowers.

Moffett became a force in Birmingham and Alabama by pushing for nursing education to be regulated and accredited. She helped the four-year nursing program at Alabama's Tuskegee University achieve accreditation, which gained professional recognition for nursing education and fostered equal treatment for black nurses.

She lobbied for creation of the publicly funded baccalaureate nursing program at the University of Alabama, said Flowers, and led an effort that enabled her BBH students to take undergraduate courses at the medical school in Birmingham, making baccalaureate education an easier goal for those diploma graduates.

And she fostered passage of the federal Nurses Training Act of 1964, which provided monies for registered nurses to pursue bachelor's degrees and enabled more diploma schools to have college-educated faculties.

"Mrs. Moffett had once again blazed a trail for professional nursing," said Flowers.

Flowers said she has always loved the learning aspect of nursing, the fascination of "peeping" into the human body, as well as the connection with patients. "Helping them through the rough patches of life."

"Most of all, I remember and revere the many things the patients themselves taught me about how to care for them. And Mrs. Moffett's notion of compassionate words and touch has never failed me," said Flowers.

Flowers advised the new graduates is to "show up and say yes" when opportunity knocks.  By heeding that mantra, many roads will open, as they did for her, said Flowers, who helped establish the Women's Foundation, which seeks to lower mortality for infants and women. In her two terms as president of the Alabama State Nurses Association, she helped craft legislation that granted prescriptive authority to nurse practitioners when collaborating with physicians.

"I could not have had a better mentor than Ida V. Moffett, or a better hero than Florence Nightingale.  They each were clearly not afraid to forge new trails," said Flowers. "All of you can do no less."

Samford nursing dean Dr. Nena F. Sanders urged the new graduates to embrace the decision to be a lifelong learners. In today's world of constant change, that is a must, she said, citing a quotation that states, "The person who graduates today and stops learning tomorrow is uneducated the day after."

She also suggested they heed scripture from I Timothy 6:11 that encourages traits of righteousness, godliness, faith, love, patience and meekness.

"May you choose to carry the legacy of Ida V. Moffett, and may the world be better because of that," Sanders said to the graduates.

The graduates included bachelor of science in nursing degree recipient Olivia Nicole Char, who earlier in the day was commissioned a second lieutenant in the U.S. Air Force. Lieutenant Char received an ovation from the graduation crowd in salute of her service.