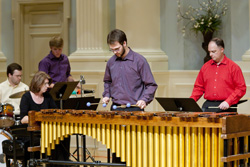 Samford University's music calendar is swiftly, sadly, running out. Next week brings us the season’s final performances of Bells of Buchanan and Percussion Ensemble.

Our Percussion Ensemble will offer its last performance of the season April 18 at 7:30 p.m. in Brock Recital Hall.

Don’t forget that the Samford Art Student Annual Juried Show in Samford Gallery continues through April 26. You’re welcome to view the work any weekday 9 a.m.-4:30 p.m., but we also hope you’ll join us for the reception and award ceremony 4-6 p.m. April 25.

Our theatre and dance students had great experiences, to say the least, at the Southeastern Theatre Conference (SETC) in Louisville, Ky. March 6-10. Have a look at the results!

“I got 10 callbacks and two job offers so far. I accepted a job in Sugarcreek, Ohio, working for Blue Gate Musicals and will play Pam in their new musical ‘Half-Stitched.’”– Elizabeth Ann Naro

“SETC this year was great! I attended several callbacks after my initial audition, and I have accepted a role with RWS & Associates, a casting company based in New York City, as Cinderella, at Story Land in Glen, N.H. I am very excited for the summer ahead!”–Jocelyn Lonquist

“I interviewed with Stagedoor Manor and got a job as Assistant Choreographer for this summer. I attended a master class with VP Boyle, a vocal coach from NYC. I attended the keynote speech by Norm Lewis. I also went to New England Theatre Conference and got a callback for the New Bedford (Mass.) Festival Theatre for ‘Singing in the Rain.’” –Heather McCall

It’s always nice to see others recognizing the talent of our students and the quality of our programs. This semester holds a few more opportunities left to enjoy both. Stay tuned!
Samford is a leading Christian university offering undergraduate programs grounded in the liberal arts with an array of nationally recognized graduate and professional schools. Founded in 1841, Samford is the 87th-oldest institution of higher learning in the United States. The Wall Street Journal ranks Samford 1st nationally for student engagement and U.S. News & World Report ranks Samford 37th in the nation for best undergraduate teaching and 97th nationally for best value. Samford enrolls 5,758 students from 48 states and 22 countries in its 10 academic schools: arts, arts and sciences, business, divinity, education, health professions, law, nursing, pharmacy and public health. Samford fields 17 athletic teams that compete in the tradition-rich Southern Conference, and ranks 3rd nationally for its Graduation Success Rate among all NCAA Division I schools.
Director of Communication
Holly Gainer
Hgainer1@samford.edu
912-344-8443