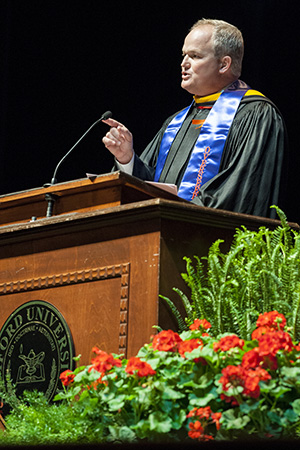 Samford University’s Brock School of Business awarded 127 undergraduate and graduate degrees during its 2013 commencement May 17.

The ceremony offered notes of joy and inspiration, but also sadness as the students and faculty donned orange Leukemia awareness ribbons in memory of business student Caroline Neisler, who died with the illness May 15.

As city president with BBVA Compass Bank, Register is responsible for leading all commercial banking activities in Birmingham, including commercial, medical, governmental and non-profit, and commercial and residential real estate. He also oversees business development and community involvement for the company in Birmingham and the surrounding area. Along with his professional pursuits, Register serves as the new chair of the Brock School of Business Advisory Board and works with various community and volunteer organizations throughout Birmingham, including the Breast Cancer Foundation of Alabama, United Way and Oak Mountain Youth Baseball.

In his address to the graduates, Register emphasized the difference between taking a job and starting a fulfilling and rewarding career. He recalled that a baseball coach of his childhood encouraged him to “have an idea” at the plate, to be “fully engaged” and think about how his actions would influence, and be influenced by, all the variables of the game. “Nothing about the at-bat was static and nothing about your career will be static,” Register told his audience. He went on to tell the graduates that developing an idea required passion, intellectual curiosity and a quality he termed “it.”

To describe the kind of passion he had in mind, Register cited Colossians 3:23–"whatever you do, do your work heartily, as for the Lord, rather than for men.” “Regardless of how much or how little money you make, will you feel God's pleasure when you work?,” Register asked.

Register said he recently challenged some colleagues to learn more about political, international and economic issues than they know about “the ninth graders being recruited by Alabama and Auburn.” “I told them that with everything going on in the financial services industry, particularly the events of the last 5 years or so, there was no way they would ever be successful unless they developed an intellectual curiosity about the dynamics affecting the very industry that provides them a living,” he said. “Did they want to have a job or did they want to have a career?”

“There is no doubt that you learned while here at Samford,” Register continued, “but what your time here also did is it has taught you how to learn…always asking the next question.”

Register said “it,” the final essential attribute for finding a career instead of a job, is comprised of caring, having heart and having a great attitude. In an emotional moment of tribute, Register noted that his father, a Coca-Cola employee of 43 years, rose early each morning so he could be at the plant as the deliverymen prepared to leave on their rounds. Rallying them like a coach, he told them they were headed out “to sell the number-one product in the world.” “My dad wanted his men to have “it” each day,” Register said. “He knew the difference that having heart and a great attitude could make, not only for the benefit of Coca-Cola, but also in the lives of his men.”

Returning to his recollection of those early, enlightening moments at home plate, Register urged the students across the commencement stage with a cry of “play ball!”

After the awarding of degrees, dean Finch praised the Brock School of Business faculty for creating the personal relationships that graduating seniors said they most valued about their Samford experience. He also introduced a “role model” through his announcement of the school’s 2013 alumna of the year, Vicki Briggs `09 (MBA,) executive vice president and chief operating officer for St. Vincent's Health System.