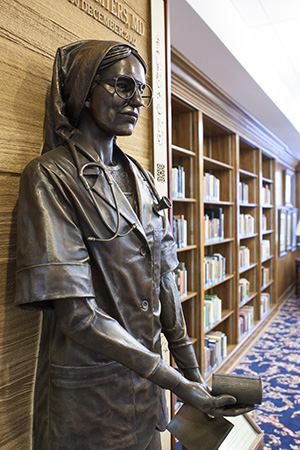 First assembled in 1999, the collection began as the Cortses’ personal collection from their international travels. Today, the collection holds more than 1,000 biographies of Christian missionaries, including Lottie Moon and Albert Schweitzer.

At the 2003 dedication ceremony, Mrs. Corts noted the importance of learning from the lives of missionaries.

“As long as their stories are preserved, they will serve as measuring points for our own journey, and models as we strive to follow Christ’s example,” said Mrs. Corts.

A 1967 Samford alumna, Myers served in Yemen for more than two decades before she was killed at Jibla Baptist Hospital in 2002.

The statue, designed by artist Glynn Acree, was unveiled in 2007 and shows Myers dressed as she might have been on a typical day at the hospital. In her hands, she carries a roll of bandages and a prescription pad.

The biography collection and the statue of Myers can be found on the second floor of the university library.

One in a recurring series on “hidden gems” on the Samford University campus.