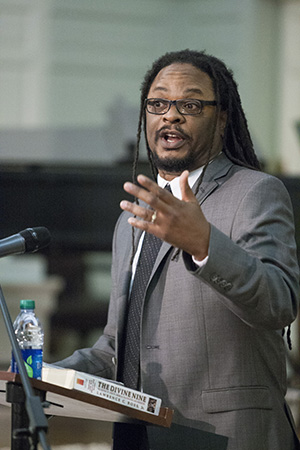 In partnership with Samford University's Office of Greek Life and Student Government Association, the National Pan-Hellenic Council welcomed historian Lawrence Ross to campus Feb. 27 to discuss his book, The Divine Nine: The History of the African-American Fraternities and Sororities.

Having been a writer since 1995, Ross said the idea to write a complete history of the NPHC fraternities and sororities came to him quickly one night. Searching for the book explaining the history of his fraternity, Alpha Phi Alpha, he found a book about his wife's sorority, something he had never noticed before.

"In all this period of time, we had never picked up the other person's book," Ross said.

The realization led him to look for other books, but found that a complete history of the NPHC fraternities and sororities did not exist. So, he set out to create one himself.

"These are organizations getting close to 100 years, and many do not know anything about them," he said.

Ross spoke to the Samford audience on the history of the organizations, giving details about their origins. He emphasized the role of these organizations on campuses and in the communities.

"These are the people who are being groomed to be leaders in the community," he said.

"We were manufactured with the ideals of sisterhood, brotherhood, scholarship and service to our communities. These ideals are what continue to propel us forward into the coming decades. As a council, we would like for the Samford community to garner a better understanding of our organizations in order to support and partner with us in the future," Mosley said.