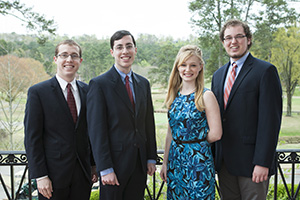 Nicholas Paul Martini, a senior from Alpharetta, Ga., won first place and a $1,000 cash prize for his paper, "Blood Will Out: the Trial of Thomas Lutherland and the Quaker Idea of Criminal Justice in Colonial America, 1692."

Rebecca Nicole Wilcox, a senior from Chesterfield, Mo., won second place and an  $800 prize for her paper, "Puritan Captivity Narratives."

Evan Musgraves, a senior from Yucaipa, Calif., placed third and won $600 for his paper, "Brethren We Have Met to Worship: The Sacred Harp and Evangelical Theology."

Franklin Lowe, a sophomore from Fayetteville, Ga., won fourth place and $400 for his paper, "Propaganda: Patriotic and Socially Progressive, a Comparative Analysis of Common Sense and the Narrative of the Life of Frederick Douglass."

The award winners gave brief presentations on their paper topics at a luncheon at Mountain Brook Country Club on Wednesday, April 3. A bound volume of the papers was dedicated to Samford history department chair Dr. S. Jonathan Bass.