'I Have a Dream' Speech Moves Samford Students

Published on February 7, 2013 by Mary Wimberley   Share this on: 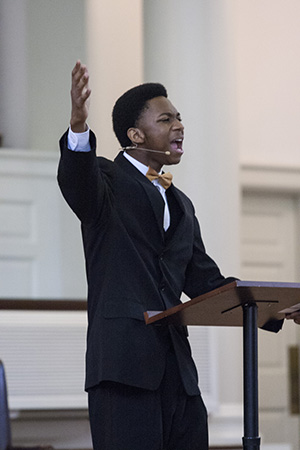 The resounding words of Dr. Martin Luther King, Jr.'s famous "I Have a Dream" speech brought a Samford University convocation audience to its feet Thursday, Feb. 7.

Timotheus Miller, a senior at Birmingham's Wenonah High School, recited the speech from memory during the Black History Month program in Reid Chapel.  The speech was first delivered by the late civil rights leader in 1963 at the Lincoln Memorial in Washington, D.C.

Miller, who says he has repeated the speech "too many times to remember," first presented it as a sixth grader after a teacher tapped him for the assignment.  His venues are mostly churches and schools in the Birmingham area.

His Samford audience rewarded him with a heart-felt ovation after his recitation.  Many had never heard the original 17-minute speech in its entirety, or live.

Samford senior Denevia Thomas said she had heard the speech many times, but never given by a person.

"My dad had it on tape, and would play it when I was growing up," said Thomas, whose family moved to Phoenix, Arizona, from Louisiana six years ago.  Also, her church often used the speech on a recording for early-morning wake-up calls to members, she recalls.  "I have never heard anyone give it live. He was wonderful," she said of the high school orator.

Miller was joined at Samford by members of the Wenonah Student Government Association, who mingled with their Samford counterparts at a reception prior to the convocation.  Wenonah SGA president Shaneka Campbell looked forward to meeting Samford SGA president Cameron Thomas. The visitors, including about a dozen students and three teachers, enjoyed lunch at the Rotunda Club with Samford president Dr. Andrew Westmoreland and campus tours.

Before the two groups went into the convocation, Cameron Thomas led a brief prayer, asking that God guide the high school and college student council members "to be respected leaders at Wenonah and Samford, and in the community."

The program opened with a documentary that featured images of historic Civil Rights movement events in Birmingham and throughout the nation, including the August, 1963, March on Washington that was the setting for the King speech.

The Samford Gospel Choir led the audience in a hymn, "Lift Every Voice and Sing," which, with "Connecting the Past with the Future," is the theme of Samford's Black History Month observance. Many more events are planned for February.

Miller, son of Elodia and Henry Miller, aspires to be a politician one day. Before that, he has his sights on service in the U.S. Marine Corps and law school. And most certainly, many more inspiring speech presentations.