Law Symposium Explores Use of Social Media in the Courtroom 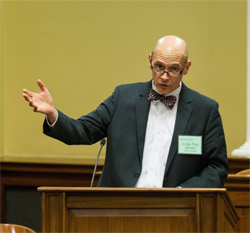 Samford University’s Cumberland School of Law hosted a symposium on The Use of Social Media in 21st Century Litigation, organized by the American Journal of Trial Advocacy, Feb. 8. Approximately 200 participants heard panelists and speakers considered to be the nation’s leading experts on when and how social media can be used in legal proceedings.

Judge John L. Carroll, Cumberland dean and Ethel P. Malugen Professor of Law, welcomed the participants to the moot courtroom that bears his name. Carroll has addressed these issues as a professor teaching discovery courses and as a member of the U.S. judicial conference advisory committee on the federal rules of civil procedure. He led that body’s discovery sub-committee in 1998 and 1999, as it began considering how to treat electronic communication in discovery.

The other speakers and panelists included:

The old ways of legal discovery--video surveillance, private investigators and diaries, to name a few-- remain relevant, but social media are the new “holy grail,” as panelist Browning put it. These days, the wounded bank robber pauses in his escape to update his fugitive status on Facebook—“one in the head, still ain’t dead!." What happens in Vegas is unlikely to stay in Vegas when one is served—via Facebook–in divorce proceedings.

Private services now help lawyers access the devices and social media accounts that record where we were, when we were there, what we said, what we bought, who we were with and what we told our “friends” about it in the supposed privacy of our Facebook pages. “They’re doing the job for us,” Browning said of incautious social media users.

In spite of this rapidly expanding collection of data, the symposium revealed that existing laws, rules and practices might be sufficient to guide its increasing use. They noted, for example, that lawyers still bear the traditional burdens of using what they find. “If you can’t lay the foundation at trial, it’s not coming in,” Frazer said.

Keynote speaker Grimm addressed that last point—admissibility—at length, and presented some surprising conclusions. He cited a case in which a judge categorically dismissed internet evidence, and another in which multiple judges thoughtfully wrestled with such evidence as if its challenge is unique. Grimm faulted both approaches, noting that existing rules don’t always allow judges the last word because those rules apply quite neatly to this evidence. In fact, he said, existing rules require judges to admit such evidence if it meets certain basic and longstanding criteria.

Likewise, other panelists said that the rules and ethics governing discovery, jury selection, witness contact, etc., have not become obsolete as digital communication and social media have become pervasive. They said that in most cases new rules are not needed even if they could keep pace with technological change, which all agreed is not possible. Rather, lawyers and courts must thoroughly understand existing laws and rules and bring digital evidence under that tent in order to serve justice and their clients. Several panelists said that failure to do so now amounts to professional malpractice.

So, what might have been a frightening subject for defendants, lawyers and students alike actually held good news for all.

Yes, social media offers little, if any, privacy, but existing laws, ethics and the rules of litigation still constrain how that information is acquired and used in litigation.

Yes, lawyers and judges must work hard to keep up with and understand social media and how it can be used in litigation, but that evidence can fit into the existing framework of discovery and trial. The familiar foundations of good legal practice remain.

Law students, facing grim employment statistics, learned that they have what Bennet called “a huge advantage” because the new technology “is the stuff of which their lives are made.” Frazer emphasized that point, giving hope to those students and putting more seasoned lawyers on notice. “If you’re a young lawyer or a law student and you’re worried about the job market, the best thing you can do for your career is embrace social media,” he said. “You can build you own practice right out of that.”
Samford is a leading Christian university offering undergraduate programs grounded in the liberal arts with an array of nationally recognized graduate and professional schools. Founded in 1841, Samford is the 87th-oldest institution of higher learning in the United States. The Wall Street Journal ranks Samford 1st nationally for student engagement and U.S. News & World Report ranks Samford 37th in the nation for best undergraduate teaching and 97th nationally for best value. Samford enrolls 5,758 students from 48 states and 22 countries in its 10 academic schools: arts, arts and sciences, business, divinity, education, health professions, law, nursing, pharmacy and public health. Samford fields 17 athletic teams that compete in the tradition-rich Southern Conference, and ranks 3rd nationally for its Graduation Success Rate among all NCAA Division I schools.
Director of Communication
Holly Gainer
Hgainer1@samford.edu
912-344-8443