March of Dimes Honors Westmoreland as 2013 Citizen of the Year

Published on November 20, 2013 by William Nunnelley   Share this on: 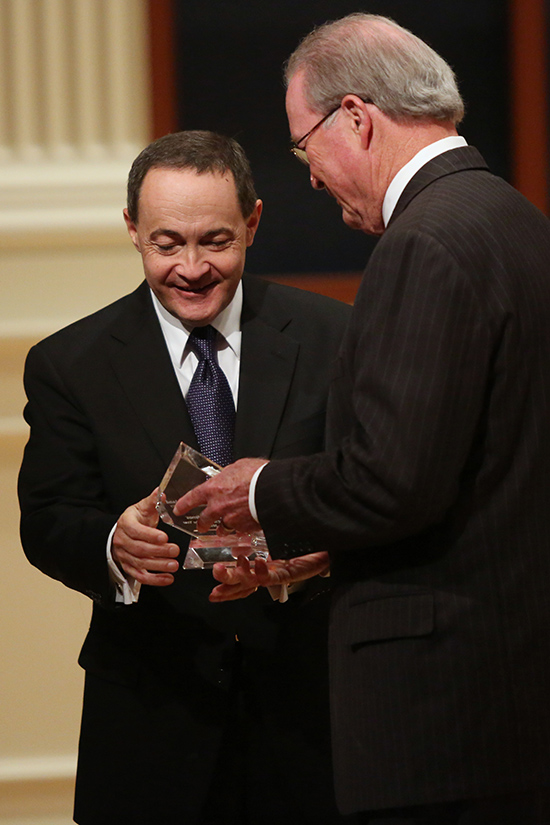 Samford University President Andrew Westmoreland accepted the award as the 2013 March of Dimes Citizen of the Year "not for me, but for Samford, which is known for its commitment to service," he said at an awards program Nov. 19.

Dr. Westmoreland was honored at the 19th annual March of Dimes Alabama Citizen of the Year Testimonial Reception at Samford's Wright Center and Brock Recital Hall.  The program honors an outstanding community partner whose distinguished leadership and devoted service have contributed greatly to the quality of life for Alabama and its people.

"I was stunned when the committee first told me about this," he said.  "This is a tremendous honor that I do not deserve, but that Samford deserves richly.

Westmoreland shared the program with Samford geography professor Eric Fournier and his son, Cole, who was born 27 weeks prematurely.

"He spent four months in the hospital," Dr. Fournier said in a video presentation.  "One of the things that happens to a child born that early is his lungs aren't ready to breathe.  One of the medicines developed by March of Dimes research helped him breathe."

Fournier said Cole's care was coordinated through the March of Dimes, which provided a "remarkable" support network.  Today, Cole is 18 and a high school senior.

"He's done great, but we owe his life to the work of the March of Dimes."

State Senator Jabo Waggoner (pictured with Westmoreland), an Alabama March of Dimes Board member, presented the award, saying, "We truly feel that Dr. Westmoreland and the relationship the March of Dimes shares with Samford University is something to be honored."  He also presented a proclamation from Alabama Governor Robert Bentley praising Westmoreland's efforts.

Westmoreland served as honorary chair for the March of Dimes March for Babies in 2008 and 2009, helping to raise more than $750,000. In addition, he has been actively involved in the community through the Birmingham Kitchen Table project, which he cofounded with Birmingham public relations executive Shelley Stewart. He also is active in the Birmingham Business Alliance and the Rotary Club of Birmingham and supports several other charitable organizations and projects in the community.

For 10 years, Samford has participated in the annual "home for the holidays" initiative with Habitat for Humanity, and Westmoreland always volunteers for that special project working alongside Samford students and employees.

The Alabama Citizen of the Year Testimonial Reception is a fund-raiser for the March of Dimes.  It has raised more than $2 million for the charity since its inception.