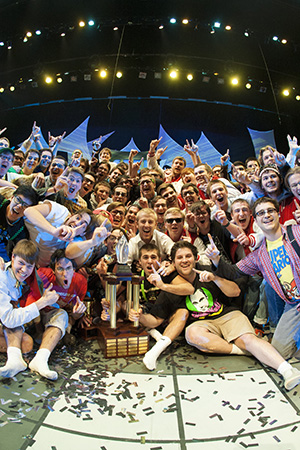 With the theme, "Nerds," the show looked at the "awkward, pimple-filled years of wedgies, bullies and Star Trek conventions" that "socially-challenged boys" faced in high school, according to show directors Taylor Horneman and Jon Hunsicker.

"We've been working on this concept for two years," Horneman said. "The guys gave their hearts and souls to get this honor."

Dudes-A-Plenty, an all-male group that forms annually just to perform in Step Sing, took first runner-up honors, ending a three-year streak as Sweepstakes Award winners. They have placed every year since 2005. Their 2013 theme was "Crash," about a group of travelers who find themselves crash-landed on a deserted island. The show won the participants' choice award for music and the judges' award for excellence in music.

"Pause," a bear-themed show that introduced viewers to "the bare necessities of life in the forest," took second runner-up honors for IGnite, an all-female group combining independents and Greek members in only their second year of participating in Step Sing. They also earned participants' choice awards for most entertaining show, choreography and costume. IGnite was first runner-up in 2012.

The members of Alpha Omicron Pi sorority continued a multi-year streak as top participating fundraisers for the Step Sing philanthropy. The participating groups raised more than $12,000 for Terra Nova Academy in Kampala, Uganda. The new school was started by 2005 Samford graduate Alisha Damron-Seruyange, and her husband, Abdul. The first classes were held in January.

David Osula, Step Sing community service chair, said Terra Nova was chosen as this year's philanthropy "because we  wanted to help a Samford alumna, and we wanted to contribute to their passion" for the people of Uganda. Osula is a junior biochemistry major from Jasper, Ala.

Step Sing is an annual student-organized and produced competition that is professionally judged. It is considered one of Samford's most cherished traditions. Fourteen groups, involving about 1,000 students, participated in this year's competition.

In addition to three sold-out performances, the Saturday performance included a live stream worldwide with a live, one-year pre-show hosted by 1999 Samford alumnus Brad Radice and 2013 Step Sing emcee Chenelle Terry, a senior journalism and mass communication major from Antioch, Tenn. The pre-show included interviews with 2013 participants, show directors, and previous Step Sing directors. Based on Twitter messages during the evening, the show was shown in such diverse global locations as the Untied Kingdom, Belize, Pakistan, Malaysia, China and Mexico.

The three-night extravaganza was the 62nd anniversary production, which originated on the steps of Renfroe Hall on Samford's East Lake campus before the university relocated to its present location in the late 1950s. This was the 42nd anniversary for the Sweepstakes Award.

Bo Morris, a senior journalism and communication major and a news and feature writer in the Office of Marketing and Communication, contributed to this story.