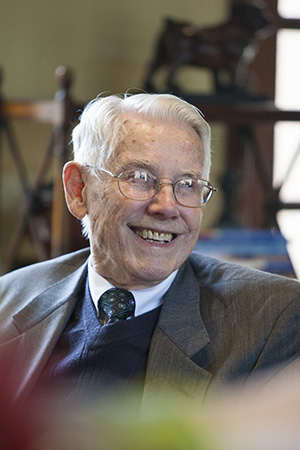 The program will provide opportunities for ministers to experience spiritual, mental, physical and emotional renewal through "Sabbath" time of three weeks to three months or "Study Leave" time of up to two weeks away from ministry duties.

"Over the decades of his ministry, Dr. Brooks has been a true mentor, teacher, colleague, and friend to ministers," said Michael Wilson, RCPE program director.  "His kind, caring manner and the way he always seems to find an encouraging word to say are only two examples of many ways he has been a role model of effective pastoral ministry.  This fund will allow us to extend his positive influence in the lives of ministers far into the future."

The new fund will help make it possible for ministers to participate in an activity Brooks found to be among the most beneficial to him and his ministry.  The responsibilities and demands of congregational ministry are such that time away for mental, spiritual and physical renewal is rare. Very early he discovered the importance of extended time set aside for study and renewal.  Brooks made it his practice to spend a period of weeks each year for the purpose of such renewal.

Of the new fund, Brooks said, "The time away for study and renewal was of such benefit to me, I started making it a part of my routine each year.  I'm glad this new fund will help other ministers have opportunities for Sabbath time.  I know from experience what a difference it can make in their lives and ministries."

Dr. Brooks served as pastor of Vestavia Hills Baptist from 1969 until 1988.  In 1989, he was named Minister to Students at Samford, the first to hold that position.  He served for 14 months until Paul Basden was named to the post. When Basden left Samford in the mid-1990s, Brooks served in the post again for five years.

Born in Grayson, Ga., and reared in Decatur, Ga., Brooks graduated from Emory University after service in World War II and earned a degree from Southern Baptist Theological Seminary in 1951.  He served as pastor of churches in Eatonton and Swainsboro, Ga., for 10 years before accepting the pastorate at First Baptist Church of Florence, Ala., in 1961.  He remained there for six years and served as pastor at Parkview Baptist Church in Monroe, La., for 14 months before coming to Vestavia Hills.

Brooks retired from Vestavia in 1988 but remained active in Baptist life over the years.  He was interim pastor of Kowloon Baptist Church in Hong Kong for six months after his retirement.  Later, he was chaplain of Unity Hospice and Minister to Senior Adults at Vestavia Hills.

Samford conferred an honorary doctorate on Brooks in 1987.

Brooks and his late wife, Olive, are parents of three children and four grandchildren.

For more information about the Brooks Fund for Pastoral Leadership Enrichment, contact the RCPE at (205) 726-4064.  Donations may be sent to the Office of University Advancement, Samford University, 800 Lakeshore Drive, Birmingham, AL 35229, indicating the gift is to the RCPE Brooks Fund.  Give online at www.samford.edu/giving.