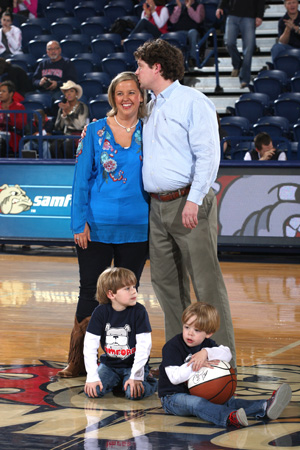 What started as a concern for an abducted child turned into a social media phenomenon that has drawn national media attention and will send the rescued child and his family to Disney World. And, it was the simple idea of a Samford University alumna that set it all in motion.

Carrie Kreps of Vestavia Hills, Ala., a 2002 McWhorter School of Pharmacy graduate, said she was "deeply affected" by the Jan. 29 abduction of a 5-year-old named Ethan from his school bus in Midland City, Ala. Ethan ended up being held hostage for 7 days before his dramatic rescue.

While following news reports of the situation, Kreps suggested to her Facebook community that Ethan was ever released, she wanted to send him to Disney World to help create happy memories that might replace the terror-filled memories of his abduction.

After Ethan was rescued and a friend of Kreps got approval from Ethan's family, she began an online fundraiser called "Send Ethan to Disney World". In one day, the goal of $7,000 was met, and as of Feb. 9, more than $10,600 had been pledged by nearly 300 donors. Gifts ranged from $5 to $500 and averaged about $20 per donor. Kreps is working with a Dothan, Ala., travel agency to arrange for the trip. Any remaining funds will be added to a trust fund that has been established for Ethan.

"I have a 5-year-old son myself, and it was heartbreaking to me that Ethan's mother knew where her son was, but she could not go get him," Kreps said in a Feb. 9 interview on the Samford campus.

Kreps and her family were recognized prior to Samford's Feb. 9 men's basketball game against The Citadel. Even as she was honored by Samford for her efforts, Kreps directed attention back to Ethan's situation and those who supported the fundraising effort.

"This is not about me, it's about Ethan," Kreps said. "This is a great example of 'love thy neighbor.' That was my new year's resolution."

"Carrie epitomizes the McWhorter School of Pharmacy legacy of community service and philanthropy outside the pharmacy world," said Monty Hogewood, pharmacy's advancement officer. "We salute that and keep it in perspective with the celebration."

"I am so proud to be an alumna of Samford and McWhorter School of Pharmacy," Kreps said. "Many of the strongest supporters in this project are fellow classmates and faculty, for which I am very grateful."

"Carrie Kreps had a fantastic idea, posted it on Facebook and it took off like crazy," McCullough said. "[She] stepped out of the world of pharmacy but yet helped to transform a very young life with her tender heart and use of social media."

Kreps began as a Samford undergraduate in pre-pharmacy before graduating with her doctor of pharmacy degree in 2002. After spending several years in community pharmacy, she joined Senior Care Pharmacy in 2006 as a consultant pharmacist working in long term care facilities in central and north Alabama. As a part of her consulting practice, Kreps is actively involved as a preceptor for MSOP. She said she is "passionate about sharing the art of consulting pharmacy with students."

Carrie and her husband, Joseph, a 2002 Cumberland School of Law graduate, have two sons, Jay, 5, and Forrest, 3. They are active members of Dawson Memorial Baptist Church.